The Michigan Supreme Court has seven members elected to eight-year terms. Two are elected every other year except for every eighth year, when one is elected. Though candidates are chosen by political parties, they are elected on a non-partisan ballot.

Normally, I don't do maps of statewide races in which two candidates are elected, but in this case in particular one of the Democrats dominated at one of the Republicans' expense, winning every county, so it's clear that the real race was for second place. Also, a Green candidate got 10%. You don't usually see that happen in American elections.

I designed a ballot paper for my timeline. (I have not yet designed the entire governmental structure of Michigan, however.)
C

So I changed the Executive Council into a full-fledged legislature.

Caprice said:
So I changed the Executive Council into a full-fledged legislature.

I love both the concept of the capital relocation party and especially its name. Feels very authentic.
C

Thande said:
I love both the concept of the capital relocation party and especially its name. Feels very authentic.
Click to expand...

Thanks! The PRICFI used to be a party across the Holy Caribbean Empire, but eventually faded out everywhere except for Michigan, where they hung on due to complex political nostalgia reasons that I haven't quite worked out yet. Thinking on it, I probably should've put them between the Progressives and the Western Alliance; they're vaguely left-wing in Michigan due to having been too popular to just be a single-issue party, but not outright socialist like the Western Alliance.

Not affiliated with noted reporter WaluigiPissKink

Why Fairfield, Iowa?
A

Probably the geographic centre of the nation.
C

Has to do with some third party (the Natural Law Party) getting 10-20% of the vote in that county and nowhere else in the 90s (I think because the quasi-cult they were affiliated with had a big HQ there); since some of my TL's election results are based on third-party performances, I decided to have a party absurdly dedicated to Fairfield.
C

Made a picture of James L. Hudler (who's Michigan PM in my TL) in a suit and tie, because I could find like one good picture of him and he was dressed semi-casually in it. The picture is edited from State Senator Jim Runestad's official portrait.

I made an election map for my TL. More will come shortly, including for the Legislative Assembly, whose members are proportionally allocated somewhat by county according to the results of the Legislative Council election.
C

And here is the election for the Legislative Assembly, the lower house.
C

The Kingdom of Michigan is best described as using a semi-proportional system of representation. While the Webster method is generally used, there are a number of counties or groups thereof (henceforth referred to as county groups) that are only allotted one seat in the 310-seat apportionment used for members of the Imperial House of Commons, members of the Legislative Assembly, and most of the kingdom's members of the Imperial Conclave. Furthermore, if in any county or county group a party gains a majority of the vote, it is entitled to all of the seats apportioned to it.

One example of this last clause in action is the 2017 election to the House of Commons, in which the Conservative Party somehow completely failed to qualify for the election. The Progressives thus dominated the election, as most Conservative voters moved to support their junior coalition partner. The Party for the Relocation of the Imperial Capital to Fairfield, Iowa, formed the main west-wing opposition, as the Western Alliance did not run candidates in protest of their non-inclusion on the ballot for the 2015 Imperial Conclave election (which was a long story involving their chosen candidate for Emperor sending a letter to the Michigan Election Commission stating that, as he was not in fact running, he would like to not be on the ballot).

Caprice said:
Furthermore, if in any county or county group a party gains a majority of the vote, it is entitled to all of the seats apportioned to it.

One example of this last clause in action is the 2017 election to the House of Commons, in which the Conservative Party somehow completely failed to qualify for the election. The Progressives thus dominated the election, as most Conservative voters moved to support their junior coalition partner.
Click to expand...

Wait, then why wouldn't two parties looking to align, if they thought they could get a solid number of county-level majorities, merge and create new lists with representatives from both parties? Like, if I'm in a county where Party A and B get 40% each and Party C gets 20%, and I'm Party C, it seems like a pretty obvious move to try and merge with Party A - even if they give us only 25% of their list, far less than our fair share, that still means 5% more than the status quo. (Or, conversely, if that happened, Party B could opportunistically promote a spoiler Party D... come to think of it, that might explain the Fairfieldites.) In other words, why don't the Conservatives and Progressives do this every election?
C

Wolfram said:
. . .In other words, why don't the Conservatives and Progressives do this every election?
Click to expand...

This sort of thing is why there are only five parties in Michigan nowadays. Each party's general position on fusion tickets is as follows:

- The Michigan Western Alliance requires that any group wanting to form a fusion ticket abide by the party's manifesto at all times. This has the effect of alienating just about everyone who isn't already in the MWA. However, the MWA does have a policy of boycotting elections above the state level until such a time as the Michigan Election Commission recognizes their 2015 write-in campaign for the election for Emperor; as this election has been superseded by the 2019 election, this is unlikely to happen. Because of this boycott, voters who would normally vote for the MWA tend to vote for either the Progressives, the PRICFI, or spoil their ballot in willful ignorance of the fact that the MWA is not running.

- Aside from their single-issue preoccupation that has caused a gag rule to be placed on mentioning Iowa in the Michigan legislature (which mostly just results in its wannabe Catos the Elder being expelled from the house on a weekly basis), the Party for the Relocation of the Imperial Capital to Fairfield, Iowa could likely form a fusion ticket with the Progressives. However, negotiations consistently break down on account of the Progressives being unable to convince PRICFI that the government of Michigan legally cannot legislate on behalf of the Holy Caribbean Imperial government and as such it would be useless to add capital relocation to their own platform.

- The Progressive Party of Michigan and Independent Citizens' Party of Michigan are theoretically open to fusion tickets, but they're too ideologically opposed to one another (they tried in the 90s and it led to the fusion ticket hemorrhaging voters from either end of the political spectrum, the Conservatives winning a majority in every single county, and not a single piece of legislation being submitted to the Legislative Assembly for a number of years before the fusion ticket finally broke up and someone other than the Conservatives won any seats anywhere) and nobody else is willing to form a fusion ticket with either one of them.

In short, then, the reason there aren't any fusion tickets is because a) any groups that would be willing to fuse together have likely already done so, and b) nobody wants to repeat the Progressive-ICPM fusion fiasco anytime soon.
Last edited: Jul 12, 2020
C

Here's a rare election in which the Republicans got more votes but less seats than the Democrats.

Also, now that all the data is calculated, here's a table of the partisan lean in Michigan since 1994.
C

I figured I'd make a tutorial on how I make district maps from boundary descriptions, with Michigan's senatorial map in use from 1983 to 1995 as an example.

First, I took a county map of the state in question that I had previously made, erased the borders between unsplit counties, and labelled the districts accordingly. Split counties were labeled with the districts containing them. Michigan tends to dislike splitting counties in its districts, so most states will likely be more complicated than this:

Next, I went through counties that are split between two districts and, using a township map on another layer, as well as online maps for naming reference, I drew the borders.

For counties that are more evenly split, I filled in a township map by precinct so that I didn't have to remember everything. This was also done for counties split more than two ways. Here is one such map: 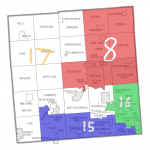 Things started to break down when I reached Wayne County, as the city of Detroit was by necessity broken up into several districts. However, I marked down what I could by township. (I also had to make some of the labels smaller so as to fit well.)

Thankfully, Michigan describes the divisions of Detroit in a way that I can map out with the help of Google Maps. So I do that, taking a screenshot of Detroit and tracing on it along the streets and railroads mentioned in the description. Sometimes, this requires trying to figure out what a certain road has become. For one such case here, I had to look into the location of a now-closed weed dispensary which was the only recent thing left to keep the old name of a road that has since been renamed. At long last, however, I came up with this map:

This was thus copied and pasted onto the main map, scaled down and rotated to fit:

And so, the map is finished.

I take it there's no US equivalent of Old-Maps.co.uk you could use for some of the older road names?
T

Alex Richards said:
I take it there's no US equivalent of Old-Maps.co.uk you could use for some of the older road names?
Click to expand...

The David Rumsey Map Collection might be a good place to start.
C

Alex Richards said:
I take it there's no US equivalent of Old-Maps.co.uk you could use for some of the older road names?
Click to expand...

Thanks! Rumsey's stuff sometimes works, but it's rare to find street names on their maps. Usually, they're good for old township boundaries and sometimes city wards during the 19th century.
C