iainbhx said:
Yeah, there's got to be some personal votes there for some incumbents.
Click to expand...

Wonder if Maaßen will be able to win in Suhl - this seems to suggest it’s up in the air.
E

Ares96 said:
I reckon the CDU will end up doing better in the Erststimmen than they do in the Zweitstimmen.
Click to expand...

iainbhx said:
Yeah, there's got to be some personal votes there for some incumbents.
Click to expand...

Pretty much guaranteed, yeah. In 2017 the CDU and SPD both did about 4-5 points better in 1st votes than 2nd. In general, 1st votes don't tend to swing as much as 2nd votes, especially when incumbents are involved. There are a lot of constituencies where the 1st vs 2nd vote winners are different - a lot of SPD seats were like this in the last election. It's also how the AfD won the most 2nd votes in Saxony in 2017 but only 3 of 16 constituencies.
E 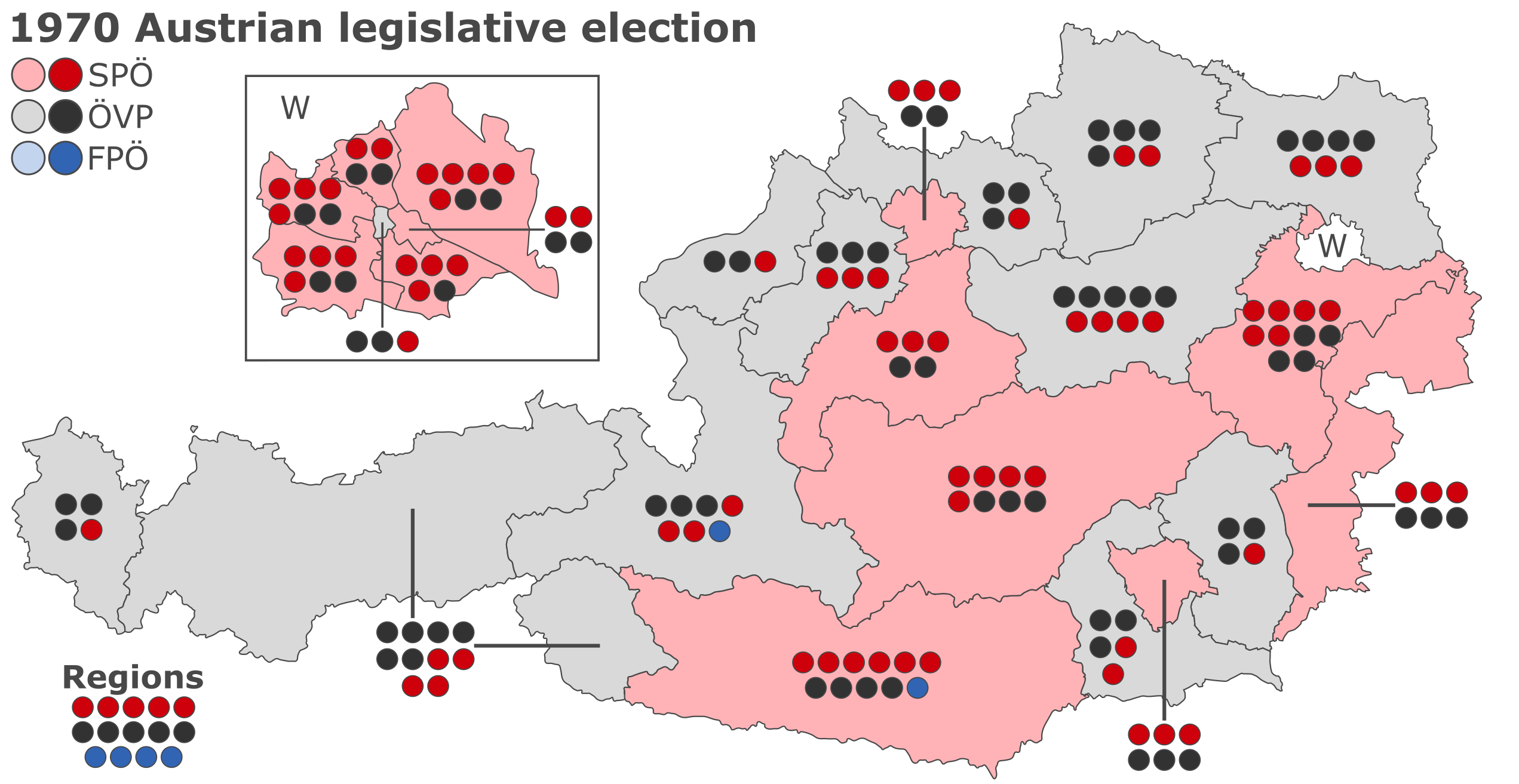 Using a modified template of the 2017 Austrian legislative election map by SD604 on Commons.

The 1970 National Council election was the 8th and final election held using the 1945 electoral law. This system divided the country into 25 constituencies – 7 in Vienna, 5 in Upper Austria, 4 in Lower Austria, 4 in Styria, and at-large for the remaining five states – which elected between 3 and 11 deputies each. The allocation of seats was updated with each census, and reflected the total population of the constituency area. In the election itself, seats were distributed through party lists in each constituency using the Hagenbach-Bischoff system. Unfilled seats were pooled together in four regional constituencies (Vienna, Lower Austria, Upper Austria/Salzburg/Tyrol/Vorarlberg, and Carinthia/Styria/Burgenland). Residual votes from the constituencies were tallied at the regional level and used to fill the remaining seats, acting as a soft leveling mechanism.

This produced a reasonably proportional system, though it was not without flaws. Minor parties such as the KPÖ and later FPÖ struggled to win seats at the constituency level, and the regional seats were rarely sufficient to properly compensate, leaving them underrepresented. The boundaries of the constituencies themselves were not necessarily equitable to all parties – rural constituencies in Upper and Lower Austria and the south of Styria often handed disproportionately large majorities of seats to the ÖVP. Further, using the total population to calculate apportionment of seats between constituencies gave greater weight to regions with fewer eligible voters. These tended to be rural areas where families had many children, and these areas tended to vote ÖVP. These factors, though subtle, added up to give an advantage to the ÖVP, who were consistently overrepresented by a couple of percentage points throughout the 1945–1971 period. In 1953 and again in 1959, they won the most seats despite winning fewer votes than the SPÖ.

In 1966, the ÖVP under Chancellor Josef Klaus campaigned on ending the grand coalition which had governed the country since 1945. For his efforts he received a majority with 85 seats, and the largest percentage point lead over the SPÖ since the end of the war at 5.8%. Ironically, both the ÖVP and SPÖ leadership got cold feet about the prospect of returning to adversarial politics and negotiated yet another coalition, but the SPÖ membership rejected the agreement. The ÖVP were thus forced to honour their election promise and govern alone.

Four years later, former foreign affairs minister Bruno Kreisky led the SPÖ to a relative landslide victory, winning 48.4% of the vote and coming up two seats short of a majority. He rejected the prospect of a new grand coalition and instead secured the external support of the Freedom Party, then a liberal party, who had one key demand: electoral reform. The electoral system had left the FPÖ substantially underrepresented for years. The SPÖ, dissatisfied with the system's biases toward the ÖVP, were happy to oblige.

The 25 constituencies were abolished and replaced by a system of state-based proportional representation, greatly increasing district sizes and ensuring a higher degree of proportionality. The four regional districts were consolidated into two broad regions (Vienna/Lower Austria/Burgenland and the rest of the country), enabling them to more effectively function as leveling seats. The method of allocating seats between states was also tweaked: it now counted eligible voters instead of the total population. Finally, the size of the National Council was increased from 165 seats to 183. Kreisky called a fresh election just 18 months later and secured an outright majority of both seats and votes, ushering in the era of SPÖ dominance in federal politics. 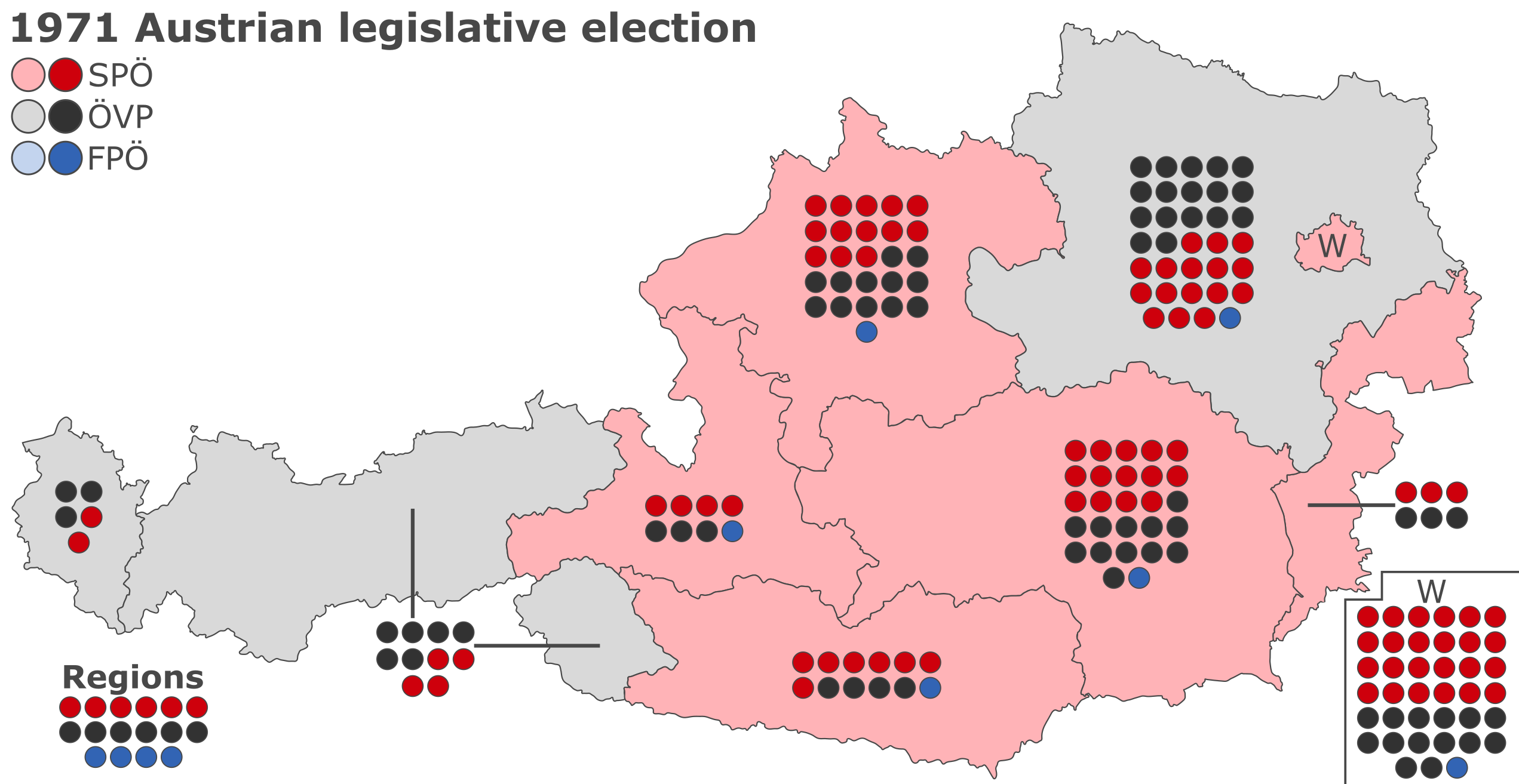 Using a template of the 2017 Austrian legislative election map by SD604 on Commons.

The new electoral system lasted until 1994, when the current three-tiered electoral system was legislated. This reintroduced a system of local constituencies, but retained state-level seat distribution while replacing the regions with a national leveling list.
E 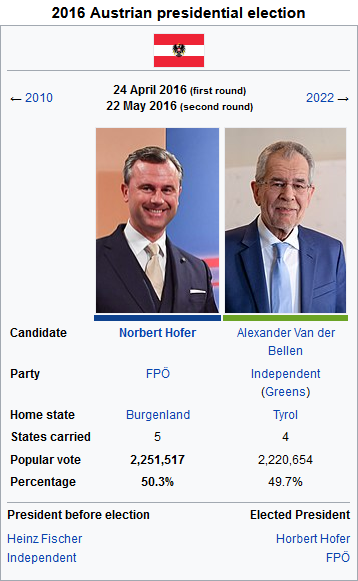 The victory of Norbert Hofer in the Austrian presidential election sent shockwaves across the world. For the first time in the modern era, a European nation had elected a far-right president. Though often considered a symbolic office, little known to most observers ahead of the election, the President is invested with a great degree of power: the ability to appoint and dismiss the Chancellor and cabinet at will, sign and veto laws, and rule by emergency decree under some circumstances. Austria's status as a parliamentary, rather than semi-presidential, nation is largely a result of convention and tradition. During the campaign, Hofer called for early parliamentary elections to be held. One need look no further than opinion polls, which throughout 2015-16 placed the Freedom Party clearly in first place, to find his motives. The President also has the power to dissolve the National Council at the request of the cabinet, and as soon as he took office, Hofer began negotiations with the government to do just that.

The SPÖ, led by new Chancellor Christian Kern on just this third month on the job, were starting to see a recovery in their popularity, while their junior partner the ÖVP were staring down the barrel of a historically bad result. Neither were particularly keen. But with Hofer taking such strong initiative, all were wary of what could happen if they refused. FPÖ leaders began to suggest that Hofer could dismiss the government and simply appoint another which would request the dissolution. The SPÖ and ÖVP proposed that an election be held ahead of schedule the next year, but Hofer refused to accept a compromise. He threatened to veto the government's legislation if they did not relent. Faced with a brewing constitutional crisis and the prospect of gridlock for the remainder of the term, and hoping that Hofer's antics had soured the public against the FPÖ, Kern and the SPÖ took the gamble. The ÖVP were scathing, accusing the Social Democrats of throwing in with Strache, but they were powerless to prevent it.

While the Freedom Party saw a small dip ahead of the election, circumstances failed to avert catastrophe. Hans-Christian Strache led them to a sweeping victory with just under a third of the vote. Most of their new support flowed from disgruntled ÖVP voters and former supporters of Team Stronach and the BZÖ, as well as non-voters. They won a plurality in seven of the nine federal states, with only Vienna and Burgenland remaining stalwart for the SPÖ. The Social Democrats managed to avoid total disaster, recording a slight improvement from 2013, but nonetheless finishing a relatively distant second. On the other hand, the ÖVP's worst fears were realised as they crashed to below 20%. The Greens remained steady on 12%, and NEOS improved to 6.5%. 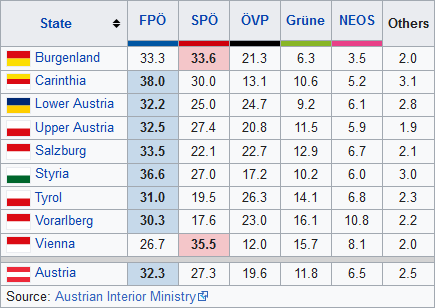 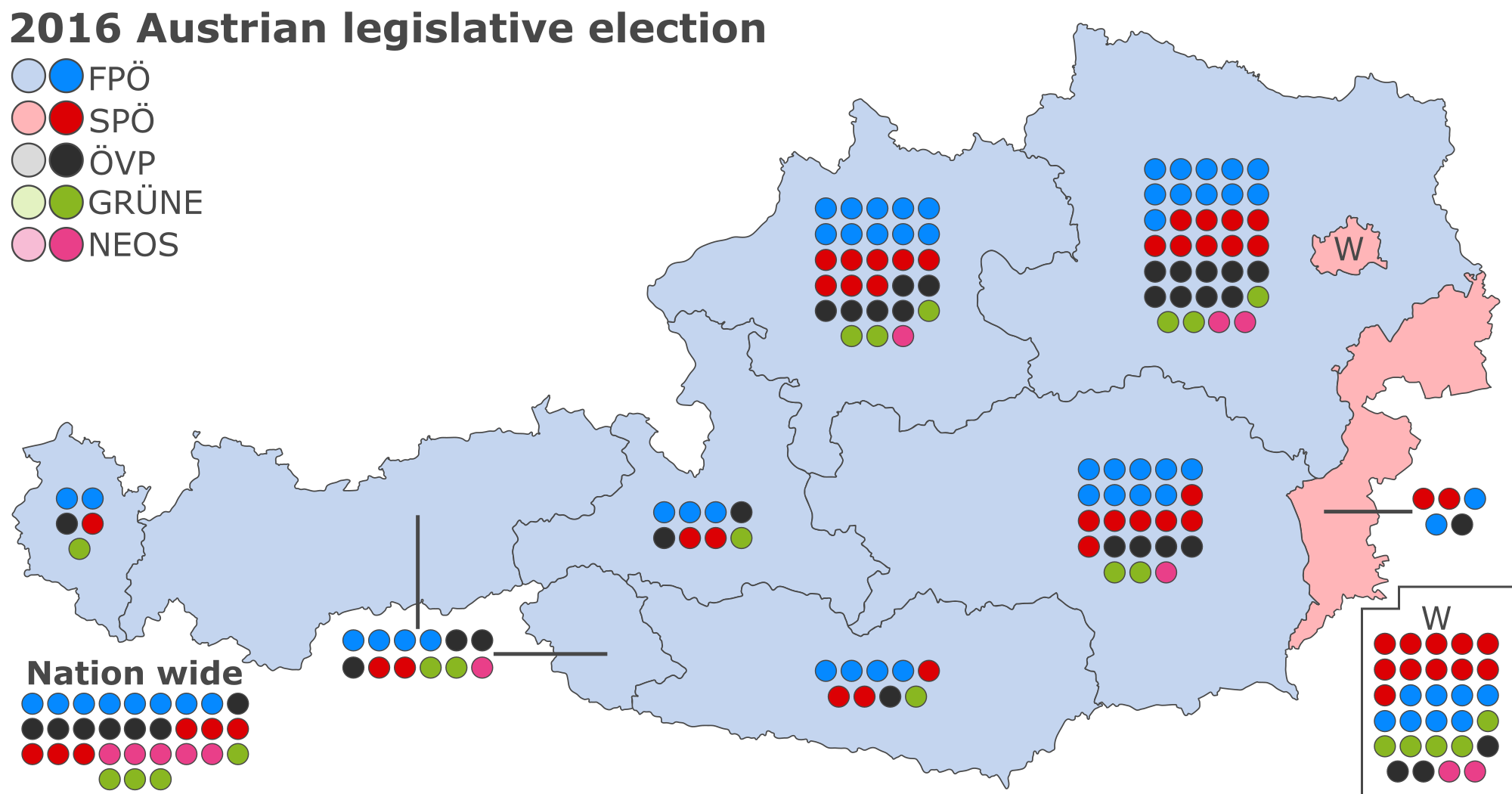 Government formation was anything but straight-forward. The FPÖ were quickly forced to admit that, like Haider before him, nobody would accept Hans-Christian Strache as Chancellor. Some demanded that Hofer appoint him anyway but, despite his success in wrecking the previous government, the President found himself constrained in building one responsible to a parliamentary majority. The SPÖ had made tentative moves toward reconciliation with the Freedom Party ahead of the election, and stated that they were open to discussions. A series of constellations excluding the FPÖ were ruled out by various parties, most significantly the ÖVP, who resolved to retreat to opposition and leave the Social Democrats to clean up the mess. Reinhold Mitterlehner was immediately jettisoned and, to the surprise of few, succeeded by foreign minister Sebastian Kurz. With alternatives exhausted, long and difficult negotiations began between the FPÖ and SPÖ. They forged a compromise reminiscent of the modern FPÖ's first stint in government under Wolfgang Schüssel, with Christian Kern remaining Chancellor while the FPÖ took a majority of cabinet posts; Strache also remained outside of cabinet.
You must log in or register to reply here.
Share:
Facebook Twitter Reddit Pinterest Tumblr WhatsApp Email Link
Top