On January 28th, 2001, the world’s first and only superhero saved the world, in what has become famously known as the North Platte Incident. He announced himself as the Paladin, and that he was here to keep humanity safe.

Seventy-two hours later, he disappeared, never to be seen or heard from again.

Theories abounded. He was kidnapped by the Soviets to help create the true New Man. He returned to his home planet. He was an actor, hired to cover up what really happened. He broke under the pressure, and decided he preferred a life of anonymity. He died saving the world again, in some incident kept hidden from us.

Or, someone or something had him killed.

In their explosive book, investigators Marcel Barnes, Benjamin Becker, and Brody Paxton, drawing on over a decade of research, interviews with witnesses and whistleblowers, and more, examine the facts and fictions surrounding the Paladin...and come to a shocking conclusion.

The Imperial Kheshig are the imperial guard for the Imperial family of the Galactic Khanate, reporting directly to the Khagan. The Kheshig traces its heritage to Aelred Khan’s original kheshig, but officially dates its constitution to T.A. 1, Aelred’s ascension to Khagan of Olon Gol, making it the oldest military unit in continuous operation in the history of the Khanate. Individual members of the Kheshig are known as baghaturs.

In addition to his own extended family and clan, the original Imperial Kheshig was drawn largely from the relatives of Aelred’s generals, retainers, and vassals, usually non-heir sons or nephews. Service in the Kheshig was considered a high honor, but especially in its early era under Aelred, was also seen as a mechanism to ensure good behavior from a baghatur’s relatives. Exceptional individuals not related to the higher echelons of Khanate power could be granted membership in the Kheshig due to exceptional service.

Over the centuries as the Khanate expanded, the Kheshig was reorganized, primarily under the reigns of Khagan Bhadankhar and Khagan Bayan. Each levied sector-province was responsible for providing and outfitting one baghatur for the Kheshig, with the ranks filled out by baghaturs recruited in the traditional ways. Over time the individual levies against the sector-provinces were phased out in favor of central funding, but each sector-province was still responsible for nominating a baghatur, or “sponsoring” one from the candidate pool (usually drawn from various special operations forces).

This system endured for the majority of the Khanate’s history, but in T.A. 1218, shortly after the conquest of the cloners of Kharash, Khagan Oros phased in the Imperial Army, an all-clone force directly under the command of the Khagan. To the consternation of some subject khans, nobles, and bureaucrats, Oros dismissed the Kheshig he had inherited from his predecessor, and replaced it with an all-clone Kheshig. Historians attribute multiple factors as being behind this decision, but chief among them was the palace intrigues of various Khaerboks through history. It was at this point that the number of baghaturs in the Kheshig was fixed at 752. Following the first generation of clone baghaturs, additional baghaturs were drawn from clone special operations forces.

The modern Kheshig is split into three major components, the Day Guard, Night Guard, and the Khorchin. All baghaturs are held to exacting standards of fitness and tactical and weapons proficiency, but the Khorchin is considered “an elite force within an elite force,” a special troop of warriors that functions as the Kheshig's quick-reaction force, responding to threats the Day Guard or Night Guard do not or can not dispatch themselves. The Khorchin is also the Khagan’s special battle guard, although the Kheshig as a whole has accompanied warrior-Khagans into battle throughout its history.

Baghaturs are trained on a wide variety of modern and "ceremonial" weapons, the latter including swords, spears, and the bow, in addition to having its own special martial art, khanyn’zam. They are also trained on the operation of several crew-served weapons systems, vehicle operation, and in horsemanship. The Baghatur Powered Armor is the strongest powered armor system in use in the Khanate, superior even to the Shogun Heavy Combat Armor used by the clone commandos of the Special Operations Brigade, with many of its particular technical features known only to the scientists, engineers, and technicians sworn into the Kheshig’s support service. It is particularly notable for its helm, forged to look like howling spirits of the wind.

The Kheshig since its inception has functioned as a Tengriist military order, with many of its rituals, and especially the ceremonies surrounding initiation, kept secret even from the Khagan. What is known is that the baghaturs are devotees to the children of Tengri and Umai, the Void Sisters Anori, Khoyai, and Gurah (also called the Void Triplets), with primacy given to Anori, the Sister considered to be closest to Tengri, who holds special governance over the Wolf, Order, and Death. Her companion Borak-Uj, the wolf-spirit of the wind, is also given devotion. A baghatur’s oath is considered to last until death, but if a baghatur survives to 60 years of age, they are given a special dispensation from the Khagan to transfer to a separate ceremonial company (not numbered amongst the active strength of the Kheshig), and can choose from amongst any of the palaces maintained by the Imperial family to “guard” until they finally “sleep in the Void.” Upon the death or transfer of a baghatur, they are replaced by a candidate from the pool, after a grueling selection process.

The supreme commander of the Kheshig is called the Khaerbok. While baghaturs retain their names upon ascension to the Kheshig, if a baghatur is promoted to overall command, they give up their name (and the service record attached to their name is “closed”) and become known only by their title and the number they are in the sequence of Khaerboks. Under the reign of Khagan Safia Sarangerel Naranbaatar, especially during her minority, the authority of the Khaerbok was somewhat “usurped” by her Protector, the Lord Khamgaalak, a former clone commando given special charge of the then-Princess by the dying Khagan Khutulun.

The bloodiest day in Kheshig history was the Battle of the Presidio, in which the entire complement of baghaturs that had accompanied Khagan Khutulun, including the entirety of the Khorchin, was slain in combat, primarily by Ochir Mandas.

The Kheshig is assisted in its security mission by a Khanate Marine Corps Fleet Anti-terrorism Security Teams (FAST) Regiment on a rotating basis, who provide the stay-behind elements for Imperial residences not currently occupied by the Imperial family, in addition to other duties. At various points in history, Khagans who have converted to the faith of the Koine Chantry have supplemented (and in some instances, de facto supplanted) the Kheshig with special guards composed of Chantry Knights. Membership in the Kheshig was limited to humans only during its period of being drawn from the naturally born, a practice that has continued during the clone era.

While the Seal of the Imperial Kheshig has remained largely unchanged for most of its history, for a period of roughly two hundred years (T.A. 482 - T.A. 707), the Seal was as below, before Khagan Kadir reverted it to its original design. 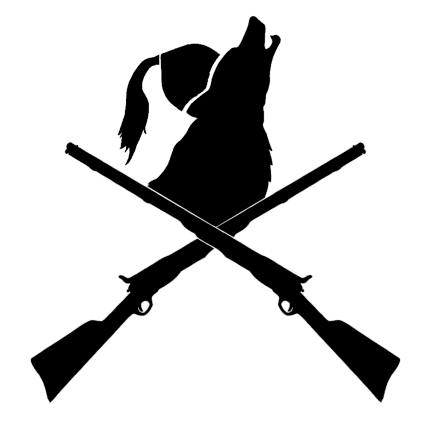 The Khorchin has its own unique rituals. It has its own unofficial emblem, often tattooed upon the backs of its members. It depicts the humanoid demonic aspect of Borak-Uj and crossed sabers rather than the Wolf aspect and rifles of the Kheshig’s official seal. 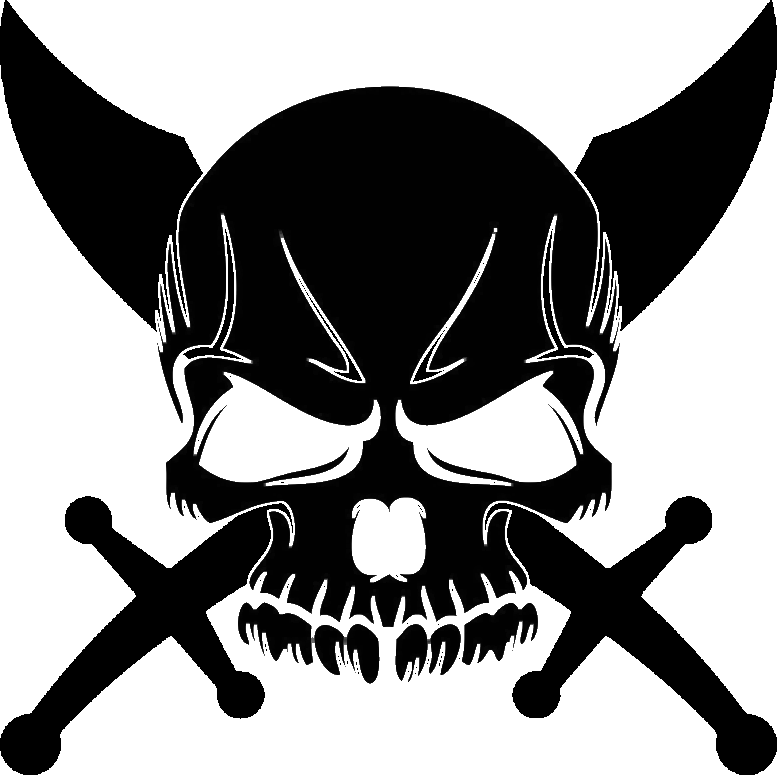 The Joy of Cooking with Jonathan Frakes is a short-lived American television cooking show created by eccentric polymath Ben Griffin in partnership with Heath M. M. Bailey (née Edwards) Productions, produced and aired by the Food Network from 1998 to 2000. The show was hosted by Jonathan Frakes, and featured Frakes and a celebrity guest collaborating on the creation of one dish every episode while having an unscripted free-flowing conversation/interview. The show was noted for its surreal and absurdist humor/elements, most iconically with Jonathan Frakes greeting every guest with a bizarre non-sequitur question after their introduction.

The show was favorably received by audiences; critical reception was divided. Despite interest from the network, the show was not renewed for a third season after a deal failed to be reached with Griffin and Bailey (née Edwards), with Griffin declaring "I have told the story I wanted to tell." It went on to gain a cult following.

"Mr. President, we can't support the minting of a platinum coin to cancel student loan debt." 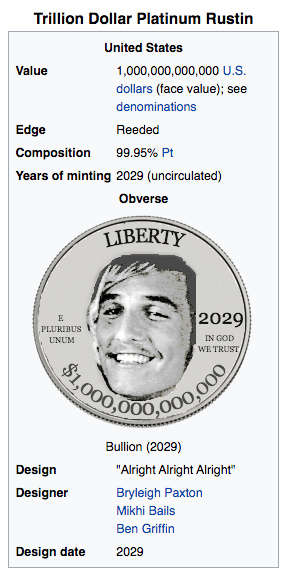