Going Over The Top: Hail the Conquering Heroes. Some of them, anyway

It was Vampire Unions that got us Vampire Weekend

Jesus, this has been a pretty depressing series but that's the darkest of the lot. Very well written but not great for my faith in humanity.
A

Fucking hell this went to a dark place.
A

I wasn't expecting it to be as bad as that.
D

Youngmarshall said:
Jesus, this has been a pretty depressing series but that's the darkest of the lot. Very well written but not great for my faith in humanity.
Click to expand...

I'm not sure how else the simple facts of this particular aspect can be presented other than with darkness.

The treatment of the returning black soldiers to America was shameful in the extreme, and there's no getting round that.

Some 50 years earlier, America had shed blood to determine whether or not slavery was a Bad Thing. Some 50 years later, Martin Luther King was assassinated for asking for Civil Rights. Some 100 years later, there is still a need for a campaign based on Black Lives Matter.
S

I wonder if you happened to see the depiction of these events in pop culture a few months ago? Of all things, I wasn't expecting HBO's Watchmen to draw attention to the post-war nadir of race relations, and that show very heavily plays up the suffering of black veterans in the years after the armistice.

I'm also reminded of the story of Billy Sing- he was a Chinese-Australian who enlisted illegally, ignoring the ban on non-white soldiers. He became a highly decorated sniper- something in the vicinity of 200 confirmed kills. And he fought at Gallipoli, so obviously it's a particularly emotive location for the story.

He was then ignored by history for the best part of a century- an inconvenience for the cult of the blonde, blue-eyed ANZAC. It wasn't until the 21st century that Chinese-Australians managed to raise a memorial to a man who proved that patriotism was nothing to do with race, and once his story was rediscovered someone commissioned a TV series about him...

Which made him white.

Because we still can't honour veterans who don't conform to our stereotypes.
Last edited: Jan 15, 2020
C

Published by SLP
I'd known there was violence when they came home, I didn't know it was that much.
R

You'll note the equipment is French. There's a reason for that. The Hellfighters had been raised as a volunteer unit by a mixture of African-American community leaders and white philanthropists who felt the African Americans were just as worthy and could prove themselves by serving. They ran immediately into problems: the administration of Wilson did not want them, the Army of Pershing did not want them, etc. After intense lobbying and accepting that all officers would be white, some units were raised, I think four regiments out of New York. They were sent to train in South Carolina. You might imagine how well THAT went down. They suffered constant harassment. The conditions were miserable.

At the same time, late in 1917 and early 1918, French command was clamouring for more people to come fight, as Verdun and the Chemin des Dames, among many other battles, had badly damaged the French Army which needed space and time to regroup (see the articles on the mutinies, for example, for the careful balancing act that needed to be achieved). Pershing did not want to send his AEF piecemeal, so he stood firm in denying any American troops over before he felt they were readies.

Ah, but the 369th and its fellow black regiments, they were not considered on the same level. So its leaders and its backers saw an opening and seized it. They transferred to France, got equipped with French kit (in the picture, you can particularly notice the Adrian helmets) and trained with French units. They were also used as morale boosters as they had a worldclass conductor in James Reese Europe who had the regimental band play jazz to wide acclaim. Then they got into the line, and they never left it, fighting for five months and taking gruesome casualties in the doing, the most of any American regiment in WWI. As mentioned, they got recognition: Croix de Guerre from the French, even after the AEF had circulated a particularly insulting memo demanding that African American troops be treated less well because they would get notions above their station. The French Army at first went along, before this got noticed and got denounced on the floor of the Assemblée nationale by some very furious députés. Likewise, Hellfighters was a nickname given to them by German troops having the misfortune to be put in line facing them. The French troops also liked them and nicknamed them Men of Bronze.

Right after the armistice, things went sour. Command of the 369th and other black units went back to the Americans rather than through the French divisions they had been serving in, and they were moved to logistical duties at best, and often gravedigging duties. It was absolutely unthinkable for the American command that they serve as occupation troops in the Ruhr.

They were not included in the parade in Paris, because Pershing, as noted, did not want them there or anywhere. However, when they got home to New York City, they marched on Fifth Avenue all the way to Harlem. 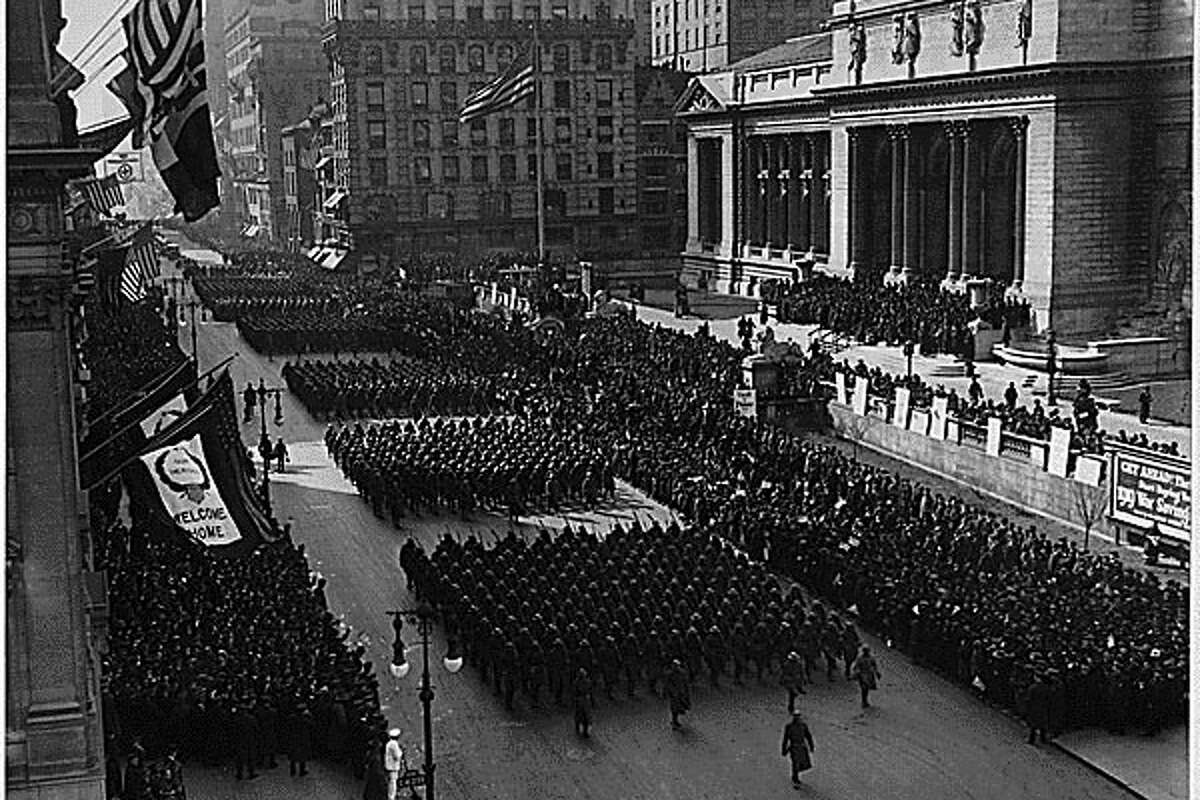 You'll notice they're not marching the way American troops usually do. That's because they were French trained and they were marching in French parade order.
V

[Space for something nice and patriotic]

@David Flin I'm so sad that this is the last article in the series! The articles are so beautifully written and so informative, and I want to congratulate you for writing such an amazing set.

The series ended on a dark note, but it was a good way to end because it's such an important and yet obscure topic that needed to be brought out in the open. Thank you for writing this.
S

I just noticed that this was the last article in the series, and I want to echo Venocara- thank you David for a thought provoking and beautifully written series of articles.
D