When does Quebec become independent ITTL?
Click to expand...

Quebec’s still part of the confederation ITTL, there’s a leader’s list linked with the wikibox that explains how TTL got there.
G

"Network" is a good movie

Callan said:
Quebec’s still part of the confederation ITTL, there’s a leader’s list linked with the wikibox that explains how TTL got there.
Click to expand...

Thanks. Very well-written scenario. Pierre Trudeau is probably one of the best-known Canadian politicians in America (at least among my parent's generation) so it's interesting to see a world where he never enters politics and the numerous butterflies this causes vis a vis Quebec separatism and devolution.
C

For the Liberals, it was a night of unexpected triumph and jubilation. For the New Democrats and the National Alliance, it was a night of deflated and dashed hopes. Polling and most pundits had been predicting the closest and most three-cornered election since 1980, with last-minute polling suggesting a late swing to the Liberal Party being written off a fluke.

The prospect of a majority government came as a surprise even to many Liberals, who started the campaign in third place and whose leaders' seat appeared to be under threat at the beginning of the campaign. But Nenshi is used to defying expectations, having beaten more established Liberals to the leadership and denying the NDP a second majority in 2017, both in polling upsets. The Liberal campaign was notable for its use of viral social media techniques and the large degree of autonomy afforded to volunteers and campaigners, utilising guerrilla marketing tactics and spontaneous rallies, as well as Nenshi's promises of transparency over donors, an important step for a party long-dogged by donation scandals. At a victory rally in downtown Calgary, Nenshi delivered an impassioned and triumphant victory speech, decrying the failures of the incumbent NDP and promising two-way dialogue with voters as "politics in full sentences".

The night was a disappointment for the Canadian Alliance and Option nationale, who hoped to form the first conservative national government since John Diefenbaker. The announcement of a "National Alliance", an electoral pact between the two parties, regularly tied for first place with the NDP for much of 2019 and early 2020. Even after the writs were dropped, polling suggested that under the vigorous leadership of former Trois-Riveres Mayor Yves Lévesque, the party would sweep Quebec, while the young Michelle Rempel was seen as an "acceptable face" for the Alliance voters among voters outside the Prairies, unencumbered by the party's socially conservative baggage. But the party suffered from message discipline and a poorly-received manifesto, dogged by questions about the workability of a national referendum on pipelines and the Alliance's broader climate change policy.

The incumbent New Democrats were seen to have similarly suffered through much of the campaign. The NDP campaign was thrown off-course early on by the unexpectedly poor growth figures announced early in the campaign, as well as by comments made by candidates campaigning for the leadership of the Quebec branch of the party. Boulerice was forced to suspend several NDP officials in New Brunswick over comments suggesting that Nenshi's race and faith made the Liberals "unelectable" in Quebec and Atlantic Canada, as well as dismissing Regional Development Minister Peter Stoffer over allegations of sexual harassment. The New Democratic campaign underestimated and largely ignored the Liberal Party, focusing their attacks on the National Alliance, who threatened the NDP in their Quebec strongholds. In the end the Liberals proved to be just as much of a threat even in those areas, picking up 20 seats in Quebec. As well as losing 87 seats, the NDP saw several high-profile MPs and ministers defeated, such as Health Minister Guy Caron, Public Safety Minister Robert Chisholm and Canadian Heritage Minister Wab Kinew all losing their seats.

Many pundits are now suggesting that the pivotal moments that undid the polling deadlock in the Liberals' favour took place in the televised debates. The two debates, one English-language and one French-language, were controversial and subject to much negotiation; the NDP refused to participate in a debate that included both the Canadian Alliance and Option nationale's leaders, which would allow the conservative electoral pact to effectively "double up". In the end, Rempel represented the National Alliance in the English debate and Lévesque in the French one. Nenshi was well-received in both debates as appearing statesmanlike and persuasive; many French-language outlets expressed pleasant surprise at Nenshi's fluent performance in the French debates, especially after the Westerner's subdued performance in the debates three years earlier. Boulerice was seen to have been done damage by Alex Tyrell's constant attacks on NDP's record on child poverty and pursuing free trade agreements, while Rempel faced much grilling over anti-immigration and social conservative figures in her party, and the Alliance's position on the environment. All three major party leaders struggled to explain their positions on government formation in the event of another hung parliament- positions that in the end proved to be irrelevant.

At-a-glance
Nenshi and his new Liberal cabinet are expected to be sworn in by Governor-General Bob Rae in approximately four weeks time.

Alexandre Boulerice has announced that he will be resigning as NDP leader effective immediately; Deputy Prime Minister Adrian Dix is expected to take charge as interim NDP leader and Leader of the Opposition pending a leadership contest. An NDP spokeswoman confirmed that the timing and rules of the contest would be agreed to before the end of the year.

Alliance Leader Michelle Rempel hailed success of the National Alliance at an election night rally in Calgary, and indicated that she would be staying on as Alliance leader. She promised that she would meet with Lévesque as soon as the new Parliament was sworn in to form a joint shadow cabinet with Option nationale.

Quebec Premier Maxime Bernier congratulated Nenshi for his victory, while warning the incoming Liberals against interfering with Quebec's special reserved powers "for the sake of virtue signalling". Premier Aheer of Alberta expressed disappointment at the failure of the National Alliance, warning that "an anti-growth agenda remains in power in Ottawa", while Ontario's Bonnie Crombie also sent congratulations to Mr. Nenshi, calling for the Liberals to continue Boulerice's committment to billion-dollar infrastructure projects already under construction such as the Toronto-Montreal ViaFast high speed rail project.

Speaker of the House of Commons Glen Murray has confirmed that he will seek a re-election to the speakership.
Last edited: Aug 12, 2020
C

The Cabinet, as composed under the 29th Canadian Ministry of The Rt. Hon. Alexandre Boulerice, February 2020:


The Cabinet, as composed under the 30th Canadian Ministry of The Rt. Hon. Naheed Nenshi, November 2020:

Showing up in public, participating in activities

Callan said:
Even after the writs were dropped, polling suggested that under the vigorous leadership of former Trois-Riveres Mayor Yves Lévesque, the party would sweep Quebec
Click to expand... 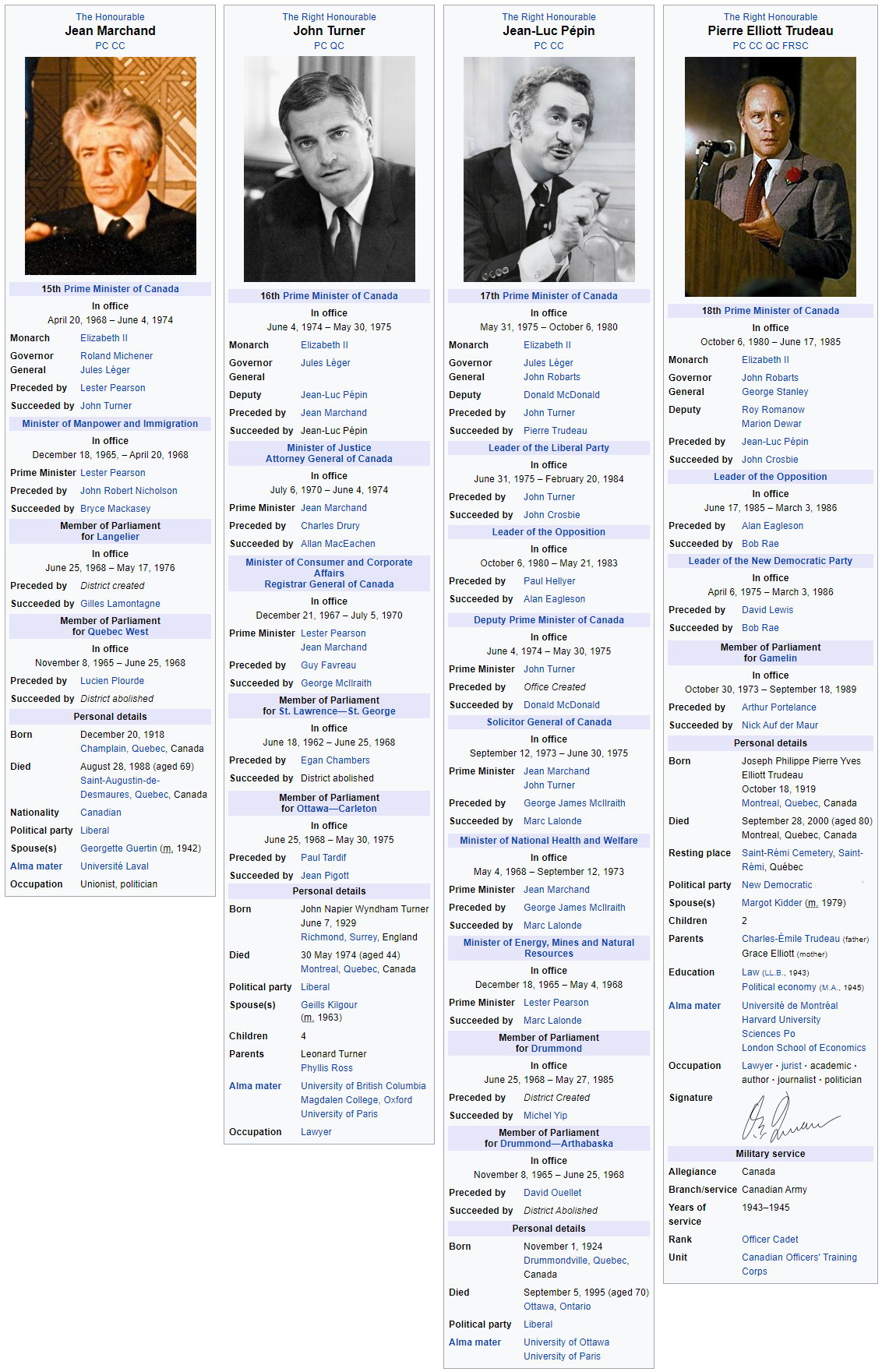 ... and where now for man raised by puffins?”

​
The 2017 Canadian Federal Election was held on May 9, 2017 to elect members to the House of Commons of Canada of the 42nd Canadian Parliament. Writs of election were issued by Governor General Sheila Watt-Cloutier on April 4, 2017. In terms of the popular vote, this was the narrowest federal election in Canadian history, with only 47,000 votes separating the Liberals and the New Democratic Party, who won a larger number of seats. The Canadian Alliance under Frank Klees lost seats, while the Radicals and Option nationale returned to the House of Commons after being shut out of it four years previously. Klees and Rebello both announced their resignations on election night.

The New Democratic Party was widely expected to win a second straight majority for the entire campaign, for the first time in their history. Boulerice and his government remained moderately popular, having pushed through generous expansions to welfare programmed and infrastructure projects, but suffered from constant disputes with provincial governments, including the NDP government in Quebec. In addition the government's concessions to the Graham Administration on free-trade agreements with America and the EU provoked ire on the left, credited with a resurgence of the Radical Party under Linda McQuaig, The party was blamed by some for the NDP's losses, accused of acting as a spoiler for left-wing voters in many marginal ridings.

Naheed Nenshi, elected to the Liberal leadership in an upset, was not favoured going into the election but ran a vigorous campaign criticizing wasteful spending and the NDP's vacillation on the issue of free trade, which the Liberals supported. The Liberals' eventual gains, combined with a loss of the NDP's majority, was regarded as a massive polling upset and led to great discussion over the quality of Canadian electoral polling. There was some discussion among pundits over the fact that without the national party list, Boulerice would have narrowly won a majority.
C

The 2021 G7 Summit was held in September 2021 at Welbeck Abbey, Nottinghamshire, England. It was the seventh G7 Summit held in the United Kingdom.

The official theme of the summit was sustainability, following repeated failures of climate change treaties through the 2010s. A broad agreement was reached for actions on climate change a series of summits to be held over the 2020s to agree binding treaties for emissions reductions. 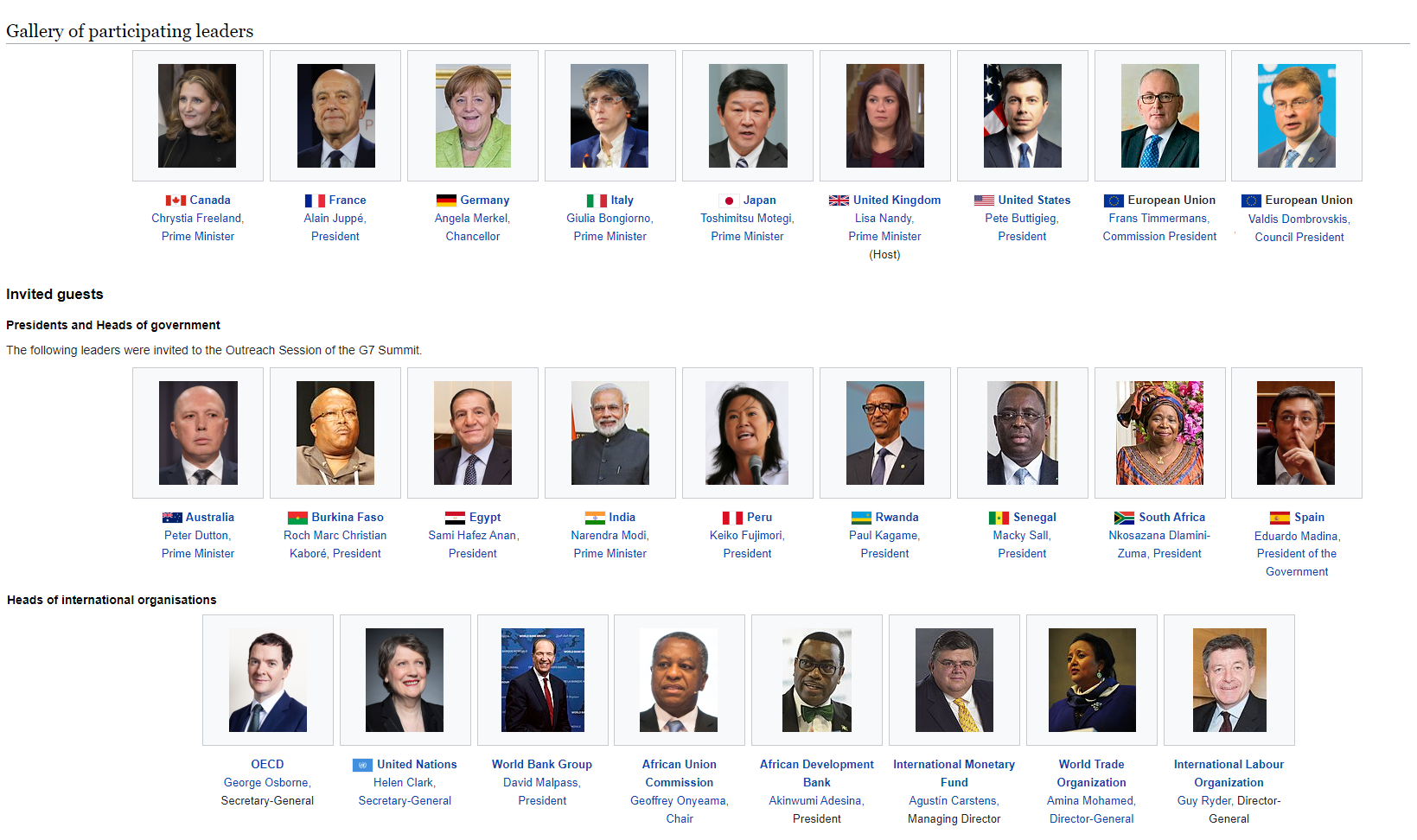 Herod Agrippa was cancelled by an owl

Did I inspire this? I'm glad we have Nandy but Helen Clark is Sec-Gen somehow and we have Dutton and a Fujimori.

Callan said:
The 2021 G7 Summit was held in September 2021 at Welbeck Abbey, Northamtonshire, England. It was the seventh G7 Summit held in the United Kingdom.
Click to expand...

I really like it but I don't see Chacón being PM, she's dead OTL due to a congenital heart failure she's always had so I think running the presidency is likely to kill her fast, very unfortunately. Perhaps Edu Madina is a better option for a non-Sánchez PSOE PM?