In our tinline, among the Papuan tribal communities of New Guinea, bone weapons were a central part of their ancestral culture. Several tribal groups still craft and use them to this day, in spite of the ready availability of metal, due to their spiritual significance. And these weren’t just made from the bones of other animals either, but from the bones of other people as well. Most commonly though, these bone daggers were fashioned from the bones of northern cassowaries. Which in spite of (or perhaps because of) being widely acknowledged as “the most dangerous bird in the world”, were semi-domesticated in several New Guinea Highlands societies, and were the only indigenous Australasian animal known to have been partly domesticated by people prior to European arrival. This wasn’t just for use of their meat and ornamental feathers, but for the use of their bones as tools, as well as to be traded in ceremonial gift exchanges. And for those tribes which semi-domesticated them, they were effectively raised as wild game animals, to be killed in ritual combat- with only a direct blow to the head, or an arrow shot from very close range, deemed to be acceptable sure-fire methods to kill them. 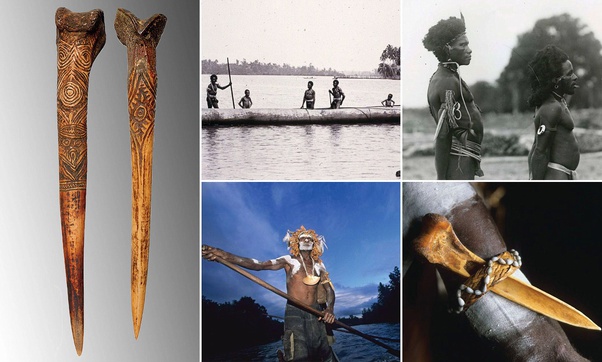 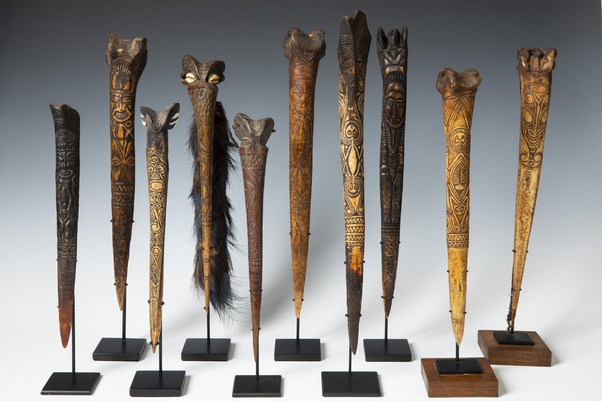 Traditionally, in their culture, human bone weapons were only deemed to ‘belong’ to the wielder, and bestow spiritual power upon them, if the person who’d donated the bone which it was fashioned from was a direct ancestor of theirs (thus providing a conduit for them to draw upon the collective strength, skill and wisdom of their clan’s ancestors). Or, in the case of animals (and ‘head-hunted’ non-relatives from other tribes), if they’d been killed in honorable, close-quarters single combat by the wielder himself, thus granting the wielder spiritual ownership and empowerment over the weapon/s fashioned from their bones via the right of conquest (though this didn’t apply to bone tools- with the only real taboo pertaining to their usage being that to it was unacceptable to craft or use mundane tools made from human bones).

And to an extent, bone weapons are still very much revered in Papuan culture and society, in a similar manner to the Japanese reverence of katanas, and even in relatively modern settlements, are still custom crafted and displayed prominently in many Papuans’ houses, in much the same way that you’ll still see katanas wall-mounted in many Japanese houses (and that you’ll see cremation urns in many Indian houses- with Papuan ancestral bone daggers also having similar cultural significance to these). 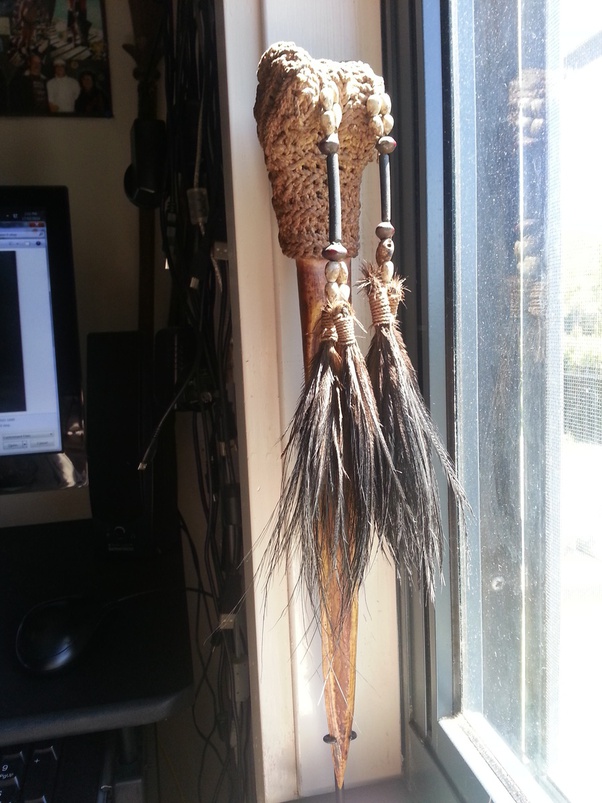 Bone only began falling out of choice as the favored material of choice for weapons and tools, in Papuan society, as late as the early 20th century (and even then, with Western missionaries’ abject horror at their ‘barbaric heathen practices’ having played a huge role, after they made the false assumption that everyone who used bone tools and weapons had to be cannibals, and the colonial authorities having actively sought to eradicate the practice). Though this was more due to their greater ability to garner cultural, spiritual, and religious significance than it was to the actual effectiveness of bone as a weapons material- with even the Papuans only utilizing bone for stabbing and/or piercing weapons (e.g, daggers, pikes, spearheads, arrowheads), since there were any number of available hardwoods that were more suited to fashioning blunt, bludgeoning tools and weapons from, and bone has extremely limited utility for cutting/slicing.

So then, your alternate history challenge is to have bone weapons be developed and/or adopted far more widely than IOTL, by a bunch of other peoples in the world. Up for it?
You must log in or register to reply here.
Share:
Facebook Twitter Reddit Pinterest Tumblr WhatsApp Email Link
Top