Nothing but Schadenfreude: A Test Thread


"You fellows, in your business, you have a way of handling problems like this. Somebody leaves a pistol in the drawer.

The truth is, it was probably a rathrr ordinary day. The weather, it being near the start of Autumn, was likely a crisp 60-something degrees. The sun was, just as likely, shining over the suburbs of Alexandria and peeking its rays through the windows of politicos and ordinary citizens alike, as they awoke on a day that changed the way the United States of America saw itself, it's leaders, and it's identity. It was an ordinary day in every sense of the word, but it was also quite unordinary from the very start.

The President had woken up that morning earlier than normal, forlorn. All he saw in the mirror was a tattered, weary, and broken man. His frame lighter than it had been just months earlier, his appetite had dropped and he walked with a certain slouch that caused the depreciation of his figure to only seem more and more apparent as he lost weight. Not helping his health, mental and physical, was the loss of sleep. Since the day it had become apparent he'd lose the battle over his Presidency due to his actions (or, if you believed him, his lack of action) during the events that transpired at Watergate a few years ago, his sleep fell drastically, going from his already low five hours a night, to three, to one, until he was hardly sleeping at all.

Pat, bless her heart, did what she could to help her ailing husband, but it only barely slowed his declining mental state. His colleagues swore up and down that he'd walk up and down the halls for hours on end, talking to statues, pictures of former Presidents, himself, anyone who would listen, really. His long, often rambly speeches, would hit every talking point he had practiced for what seemed like ages, before Richard finally collapsed into sobs. The President seemed to be the loneliest man in America. Only he deliver his salvation.

That salvation, everyone around him thought, would be his long expected resignation. Having tendered his resignation the day before, the 8th of August was his last day in the White House; the arrangements had been quickly made to broadcast a live TV address to the nation announcing this turn of events. It wasn't going to be flashy, just a straight forward account of the reasons for his early departure and an apology for the crimes he had committed and the trust and social contract he had broken. It was meant to be a sordid affair, for all of America to watch (indeed, nearly 140 million Americans watched or listened to the address. Regrettably, so did his family, despite him asking them to stay away. Of course, they couldn't have known what was coming).

While the whole world expected a resignation, or, for the non-political Americans who mainly watched ABC nightly, impeached, he had other plans. In his mind, he had been kicked around too long. From his defeat in 1960, to his defeat in 1962, and what seemed to be the final nail in his coffin in 1974, he had been pushed from left to right, with all of his accomplishments falling to the wayside for a more attractive narrative of a crook to big for his pants and a dangerous man to keep in power that had to be gotten rid of. The President, due to these sentiments, by all definitions, was depressed.

It was a quiet truth he lived with day to day while contemplating his Presidency, until it had reached beyond the point of thinking of his career to contemplating his life. More specifically, taking it. When he said those words to General Haig, it was a bitter joke, however; it rang true to him, and, like dirt under the nail of a germaphobe or the endless locking of door knobs in the mind of a man stricken with OCD, those words became all he could focus on. He really did intend to resign that day, but, sometimes, intentions don't pan out and more dangerous plans become the only way a person can carry on.

No one knows how he got the gun. No one still does. What we do know is of the litany of firings that followed the proceeding press conference. The President, who had laid in bed all day leading up to the event (refusing any sort of makeup or rehearsal time) was about to enter the room where he was to give his last address as President of the United States. The clock was ticking.

The first thing one could note is the beads of sweat pouring down the President's face. A river endlessly flowing, almost seeming to defy physics with its persistent stream, like the Northward flow of the Nile.

The President shakily pulled out a Manila folder, unusually bulky for its size but generally unquestioned. "In this envelope," the President began, stuttering, "I have my resignation from the Presidency of the United States of America. I regret that things have turned to this, but there comes a time when someone can no longer live with the things they have done and the crimes they have helped cover up." Still trembling, he began his address in full, describing, in cruel detail, the events which had taken place from the Watergate incident to that very day. Everything was as planned.

The President could have only stalled for so long. As his account began to wrap up, he reached for the Manila envelope, slowly opening it. "Now, my resignation." Something seemed off, but no one could place their finger on what. "I, Richard Milhous Nixon, being of inadequate ability to discharge my duties as President of the United States, hereby resign at 9:15 pm on the date of August 8, 1974." He was slow in saying this, trying to keep himself and his viewers as steady as possible. "Goodbye, America." Even slower, "I'm sorry." Now choking back tears, he said, lastly, "You really won't have Richard Nixon to kick around anymore." He pulled out an object from the envelope. Before anyone could stop him, the President was dead. The feed cut back to a stunned Walter Cronkite and then to black.

Several minutes later, Cronkite was back on, still stunned as ever.

"As many of us were unfortunate enough to have witnessed, the President has shot himself. We have just received news that, at 9:20 PM Eastern Standard Time, President Richard Nixon has died." Muttering to himself, his own tears starting to come to his eyes, he said "And, I'm afraid I killed him." Loud enough for viewers to once again hear, his signature phrase came through the TVs and radios of millions of Americans.

"I'm Walter Cronkite, and that's the way it is."

But yeah idk shit about the national union party 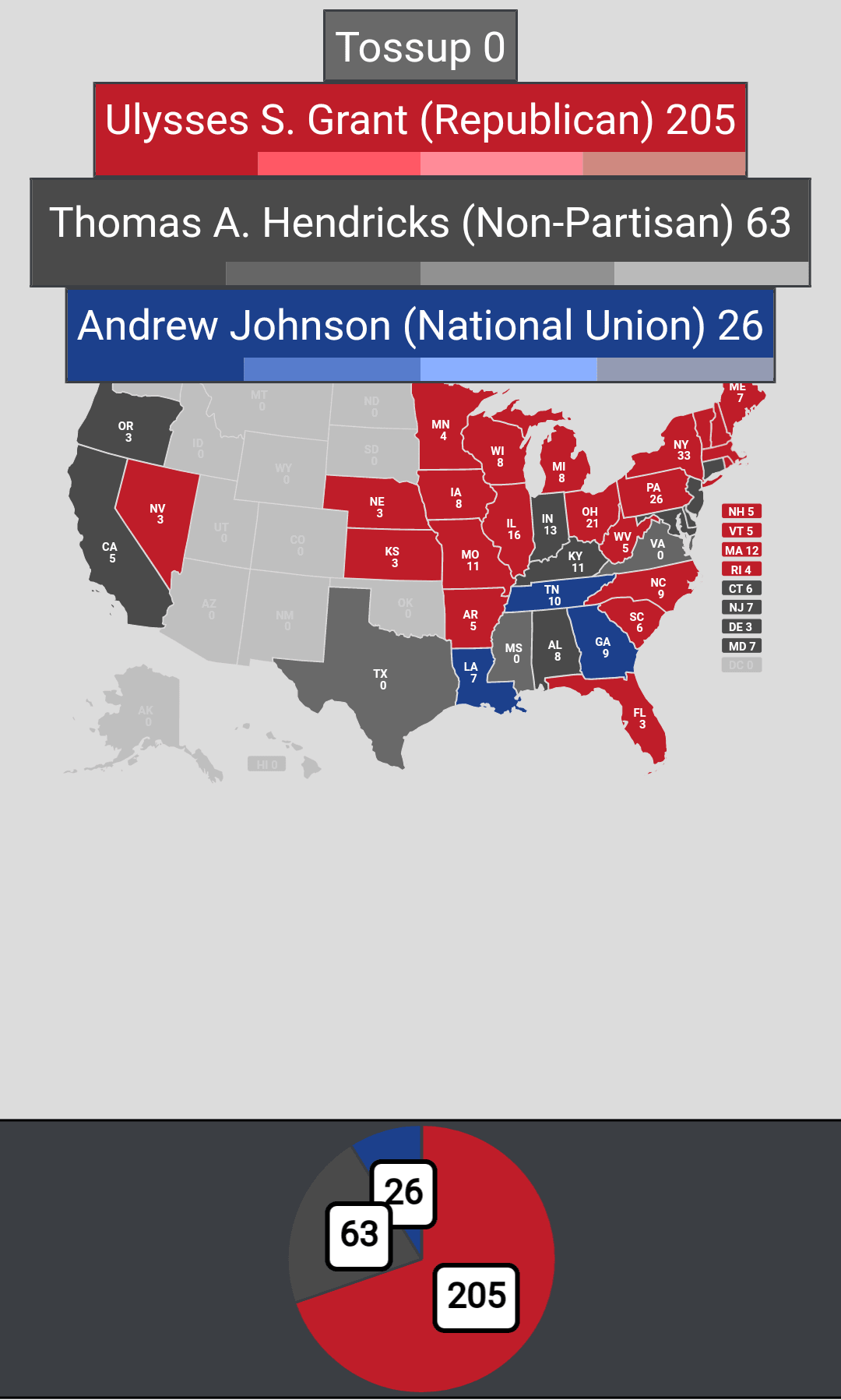 YAPms - Yet Another Political Map Simulator