Here are a couple more Colorado Congressional election maps from the 2016 elections. First is CO-02, which saw the re-election of Jared Polis to the House of Representatives for the last time before he announced his run for the governor's office this year. Democrat Joe Neguse will seek to replace him and is running against Republican Peter Yu in this mountainous district dominated by Boulder and Larimer counties (and the cities of Boulder and Fort Collins). 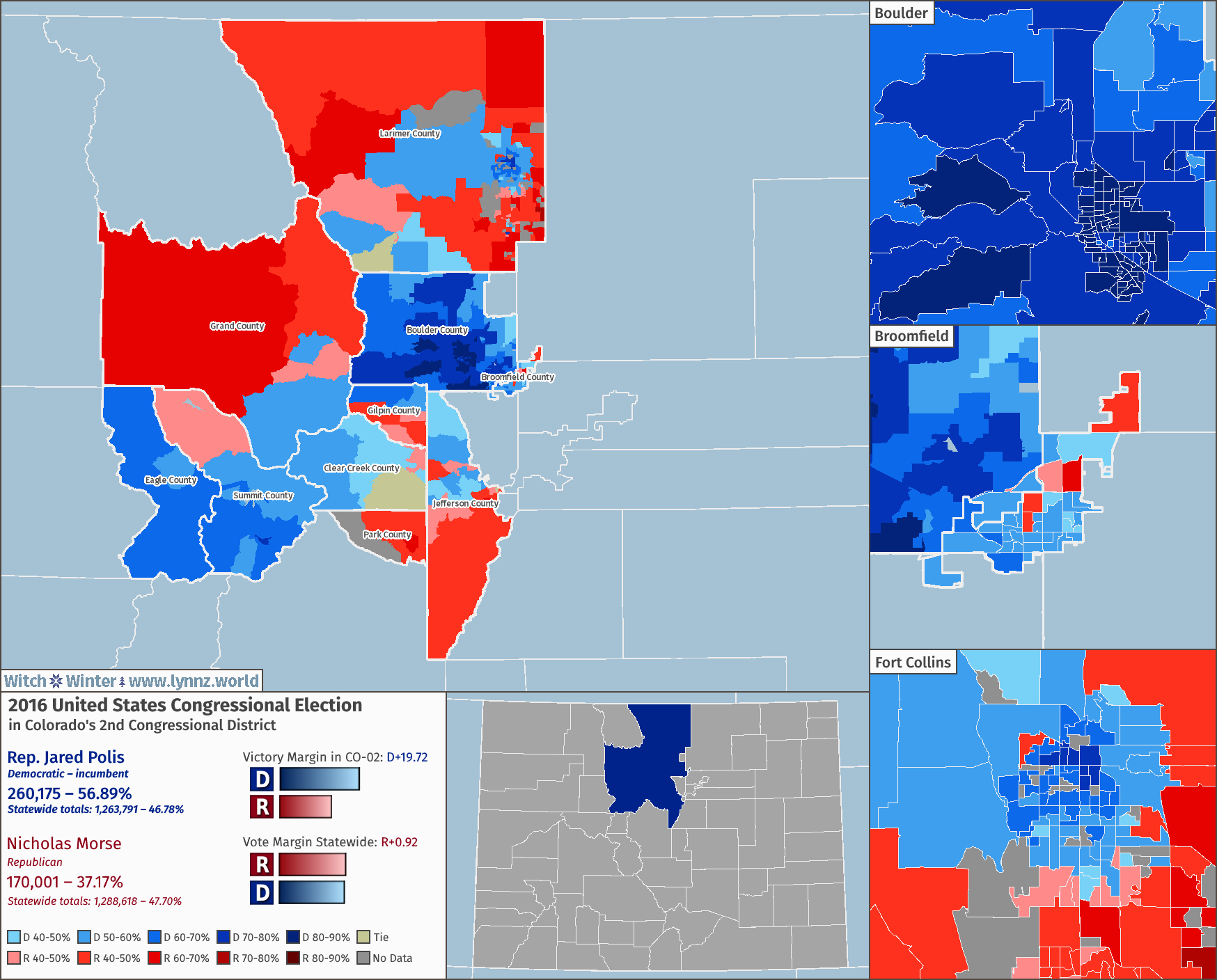 Next is CO-06 in suburban Denver which Clinton carried but Republican Mike Coffman nonetheless won on his own strength as a candidate. Democrat Jason Crow is challenging him for the seat this y ear in one of the most watched elections in the state and a test for Democrats seeking to retake the House against one of the more moderate Republicans in the House. 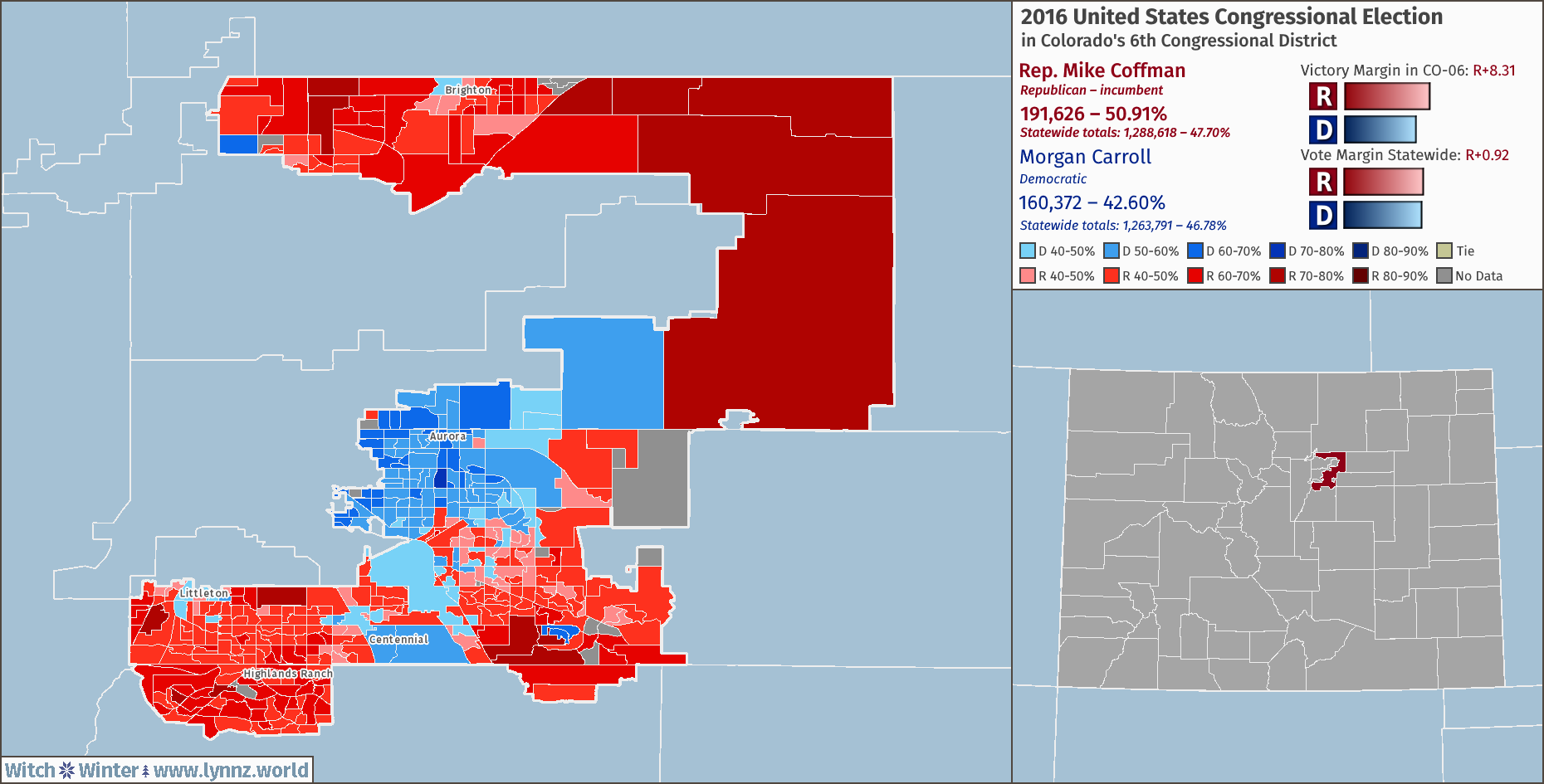 #42
Something that might be of interest since we've discussed MD Maps-the reason parts of Maryland and Montgomery County developed the way they did(I just learned this) was because Chevy Chase had some areas with restrictions on commercial property(taking that "kinda but actually really racist streetcar suburb" thing going) which diverted commercial areas to Wisconsin Avenue. That could be an interesting butterfly.
W

Roger II said:
Something that might be of interest since we've discussed MD Maps-the reason parts of Maryland and Montgomery County developed the way they did(I just learned this) was because Chevy Chase had some areas with restrictions on commercial property(taking that "kinda but actually really racist streetcar suburb" thing going) which diverted commercial areas to Wisconsin Avenue. That could be an interesting butterfly.
Click to expand...
That's definitely an interesting butterfly and something I'll want to keep in mind for future projects, especially to do with Maryland nd the DC suburbs, thanks for the info. Always interesting how little things can cause an entire shift within a state when played out over a long time.
W

Speaking of future projects, here is a bit of a teaser for something @Raven Queen and I have been working on, as a county map I managed to make entirely with QGIS and now can mess with (and add on to) for some particularly fun election map aims.

(Yes it's a WiP especially regarding Cuba) 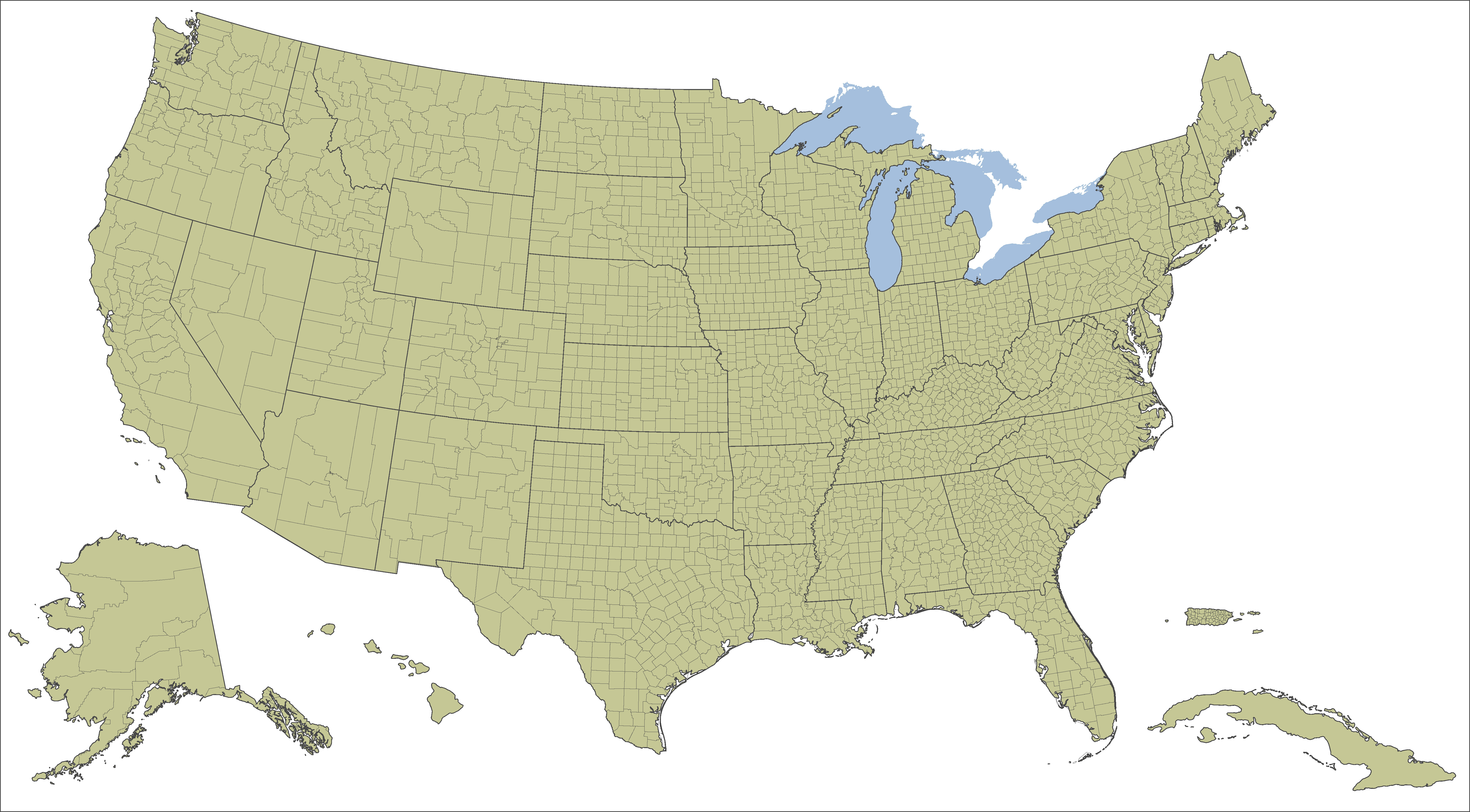 Roger II said:
I do want to know more about this!
Click to expand...
If all goes as according to plan, we should have some more stuff for this posted fairly soon.

I'm not dead yet!


The Yoop​
Here is a map for a larger project I've been developing with @Raven Queen about an alternate United States and its politics, culture, and world. As a little preview, I thought I would publish a map of one of the 54 United States: Superior. This map is a little bit of practice for larger maps, hope you all like it!

Superior is one of the newest states in the union, and also the smallest by population at just over 300,000. The state gained statehood through referendum that was decided by a Supreme Court decision, due to movements for an independent Upper Peninsula of Michigan over increased ties with Wisconsin, delays at the time on building a bridge to link it with the Lower Peninsula, and more control over the locks linking the lower lakes with Lake Superior, through which massive quantities of iron and oil travel through. Since then, Superior has maintained close ties between itself and Michigan as well as with Wisconsin and cross-border ties with Canada, making the state one of the most travel-friendly in the union. The completion of a bridge across the Straits of Mackinac and the extension of an interstate up to the state capital of Marquette have helped connect Superior with the rest of the country, even if the state remains largely rural. The state is still a favorite by the lakes and hills in the summer and by the many holiday resorts in the winter. 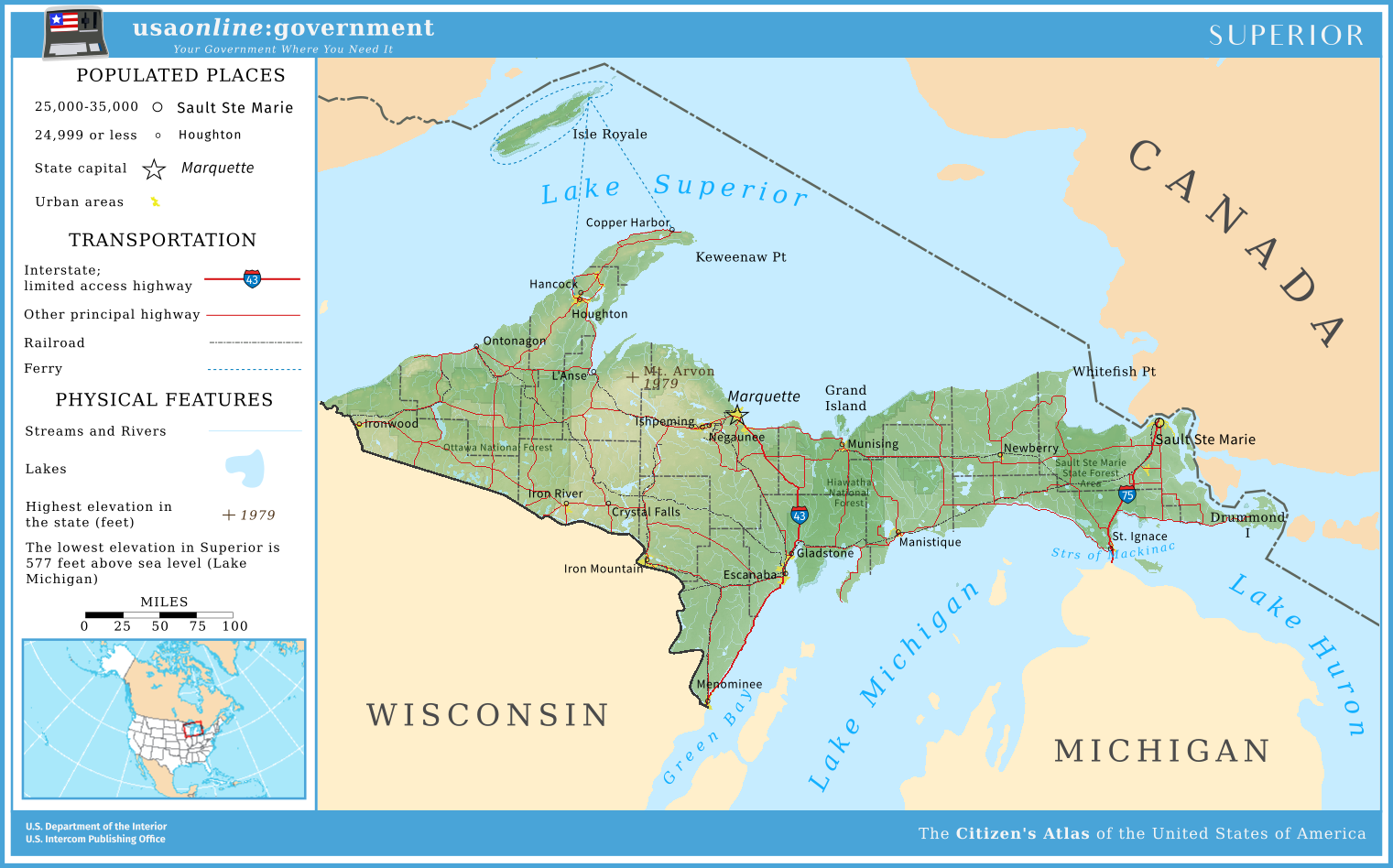 Very good, you could be forgiven for thinking it was from actually published material.
W

moth said:
Very good, you could be forgiven for thinking it was from actually published material.
Click to expand...
Thank you kindly
W

Still alive, still kicking, and back with a new map! Without further ado, here are the 2018 House of Representatives elections in the United States with a little bit of geographical and cultural flair on them in a different style I'm trying out. Hope it may be of interest to y'all. Enjoy! Done using QGIS with Natural Earth Data, National Map, and USGS data. PNG version on deviantart because it's too big to post elsewhere.

Another map from yours truly! This time taking a look at the 2016 Democratic Presidential Primary between Former Secretary of State Hillary Clinton and Senator Bernie Sanders. This contentious and closer-than-expected primary helped to change the course of the Democratic Party as we know it today and is likely to have echoes into the upcoming 2020 Primary, in which 8 candidates have already thrown their hats. PNG is here for download to view. 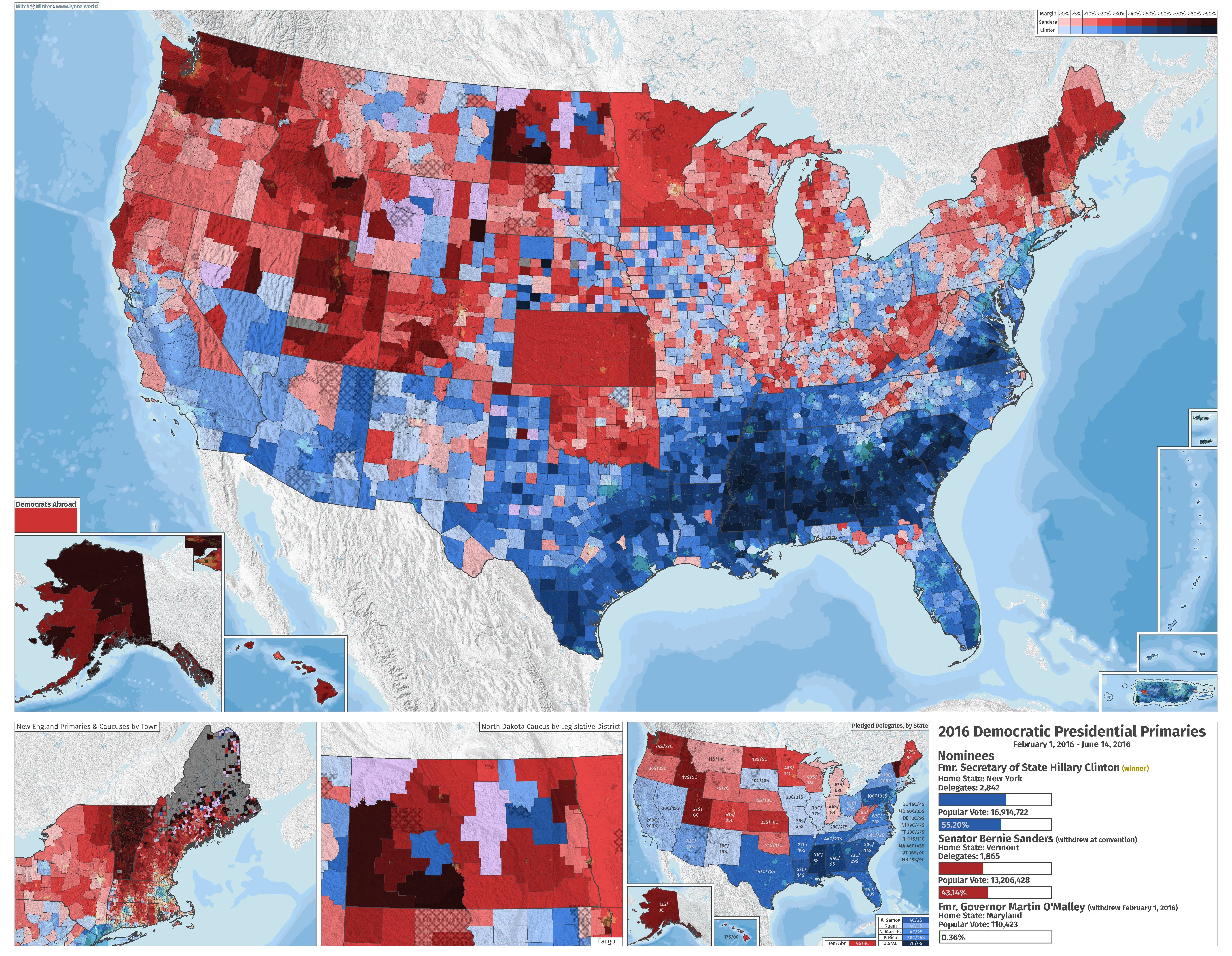 #54
Thanks for doing the map. It is a really fascinating look since it sort of does really show how well that Clinton did in the South.
W

Usili said:
Thanks for doing the map. It is a really fascinating look since it sort of does really show how well that Clinton did in the South.
Click to expand...
No problem! I hope it comes in hand for 2020 and I think it's very notable to see the divides by region and metro area and such and see how it may come into play next year. Clinton's southern margins in particular are eye-popping.
T

Nice work. When I did one of these I noticed how much North Carolina stuck out compared to its neighbours (perhaps due to when the primary was held or something?) - the trends recognisably cross the borders, but it's as though there's a UNS towards Sanders in NC compared to them.
W

Thande said:
Nice work. When I did one of these I noticed how much North Carolina stuck out compared to its neighbours (perhaps due to when the primary was held or something?) - the trends recognisably cross the borders, but it's as though there's a UNS towards Sanders in NC compared to them.
Click to expand...
The North Carolina primary was held only a couple weeks after Super Tuesday, so that really wasn't it. There are a combination of factors with North Carolina, particularly in that the primary there is much whiter than in the Deep South primaries, but unlike in similarly-white Virginia the primary electorate is more evenly spread throughout the state (as NC is less dense than Virginia) and Sanders performed better among not just whites without a degree but those with one as well, unlike Virginia. Two of Sanders' notable wins in the state are in counties home to major universities: Appalachian State University in the west and University of North Carolina-Chapel Hill in the east. It's just part of the oddities that are state primaries. North Carolina in recent primaries has tended towards the populist upstarts over the establishment picks, giving Sanders one of his best margins in the south in 2016, going to Obama by double digits in 2008, and was one of the few states to go to native son John Edwards in the 2004 primary.

Strange patterns like that are a big reason why I made this map, because they're interesting to pick out and can be a useful tool to help look at future trends for coming primaries, like the one in 2020.
W

Guess who's back! This time I've brought a map of the 2008 Democratic Primary, which was perhaps the most contentious in modern history in its sheer narrowness of result; the contest was decided down to the wire and to this day there are Democratic Party activists bitter over the result. A clash between the titans of Senator Hillary Clinton and Senator Barack Obama, the primary showed party divides along lines of race, class, and urbanism that foreshadowed developments to come even as the party remained relatively unified following the primary in the 2008 Presidential election. It's a primary that may serve, along with 2016's, as a good reference for what may lay before us in the 2020 Democratic Presidential Primary.

PNG is here to view 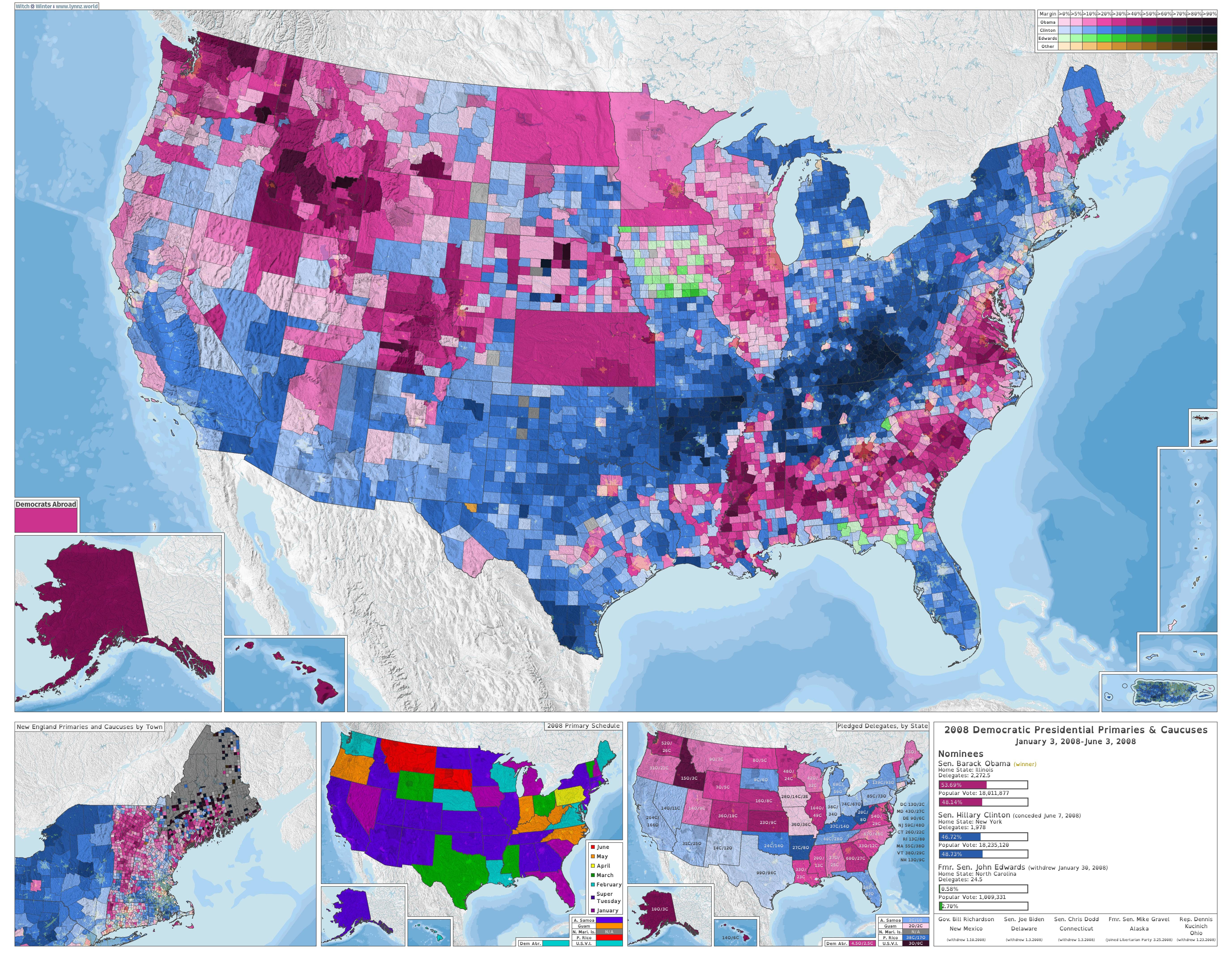 It's the economy, stupid, and a giant sucking sound: Here is the 1992 Presidential Election map from yours truly. A momentous election that tested the strength of the two party system against insurgent third party candidate Ross Perot, it ultimately led to the victory of New Democrat Bill Clinton and a new age of politics that persists to this day. 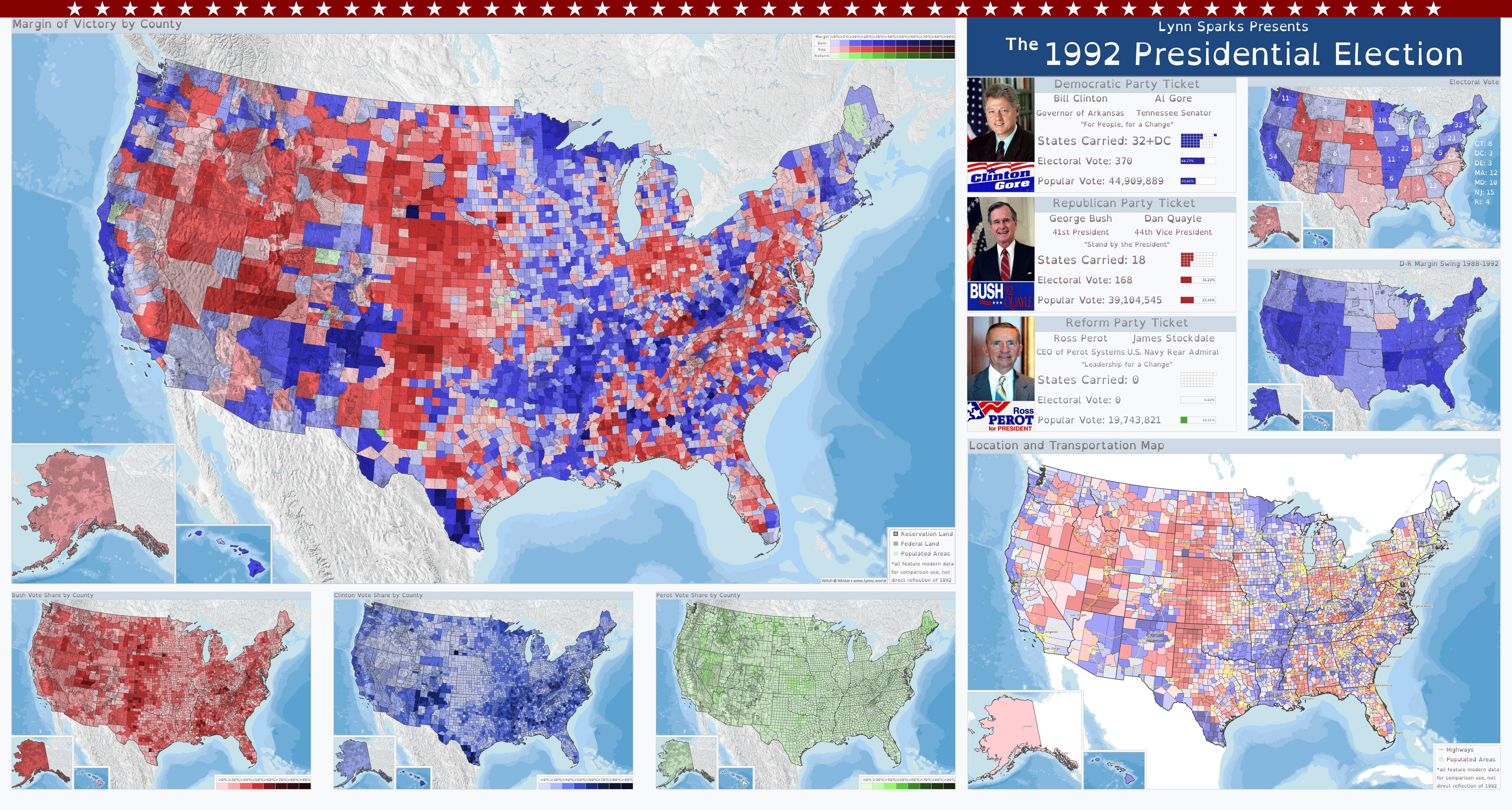 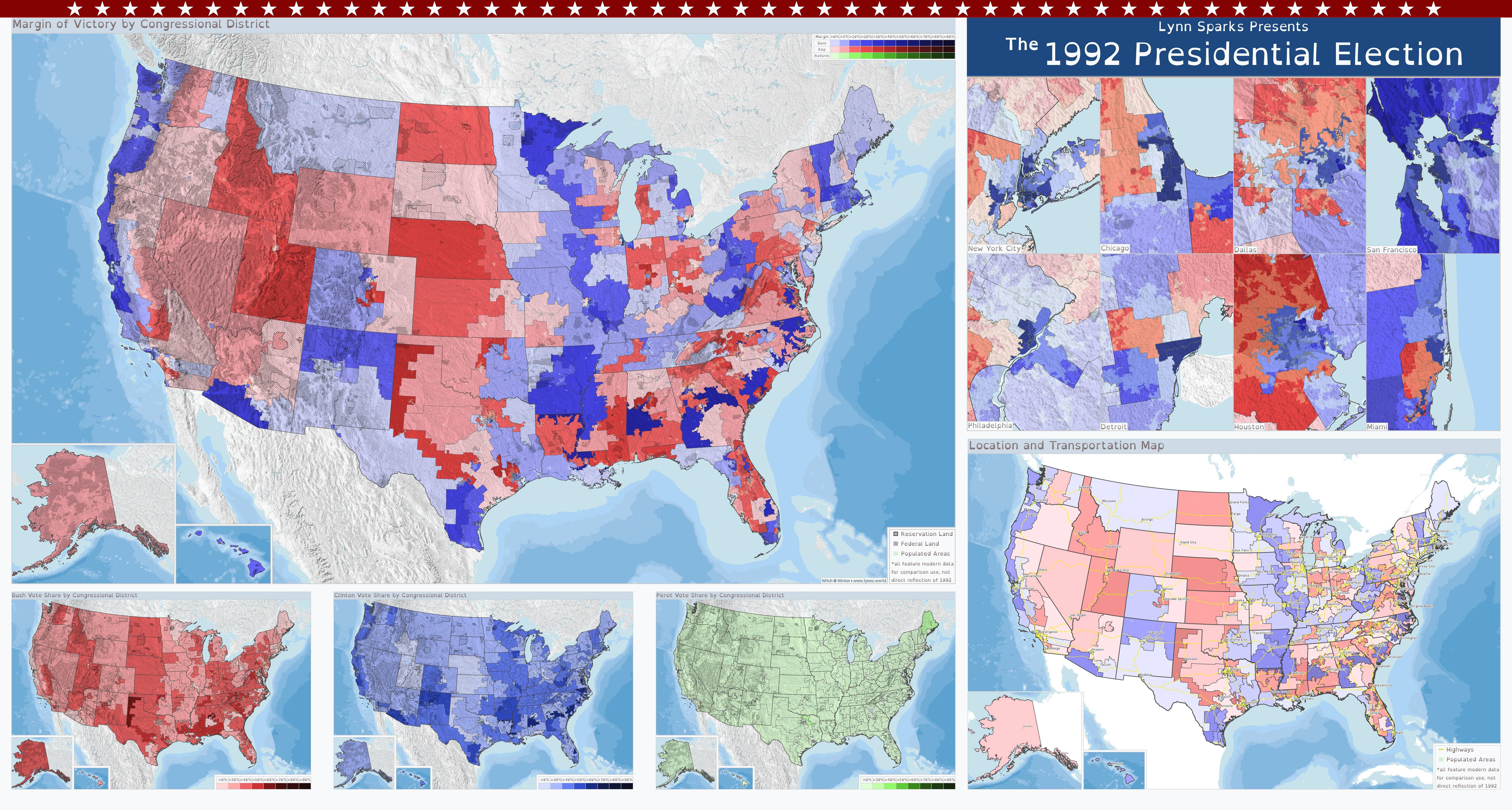 I've been a big fan of AJR Election Maps' work for a while now, and particularly enjoyed @Thande 's work creating detailed election maps from 1984 through 2016 for the United States. As a fan, and seeing the project unfinished, I took it upon myself to continue the series since 2017. Now that the NY-27 special election has concluded, I can at last post the 2017, 2018, and 2019 editions of the series (with Thande's permission). I also plan to continue the series with the 2020 election and beyond, as well as backtrack beyond 1984 to make the series as detailed as possible. 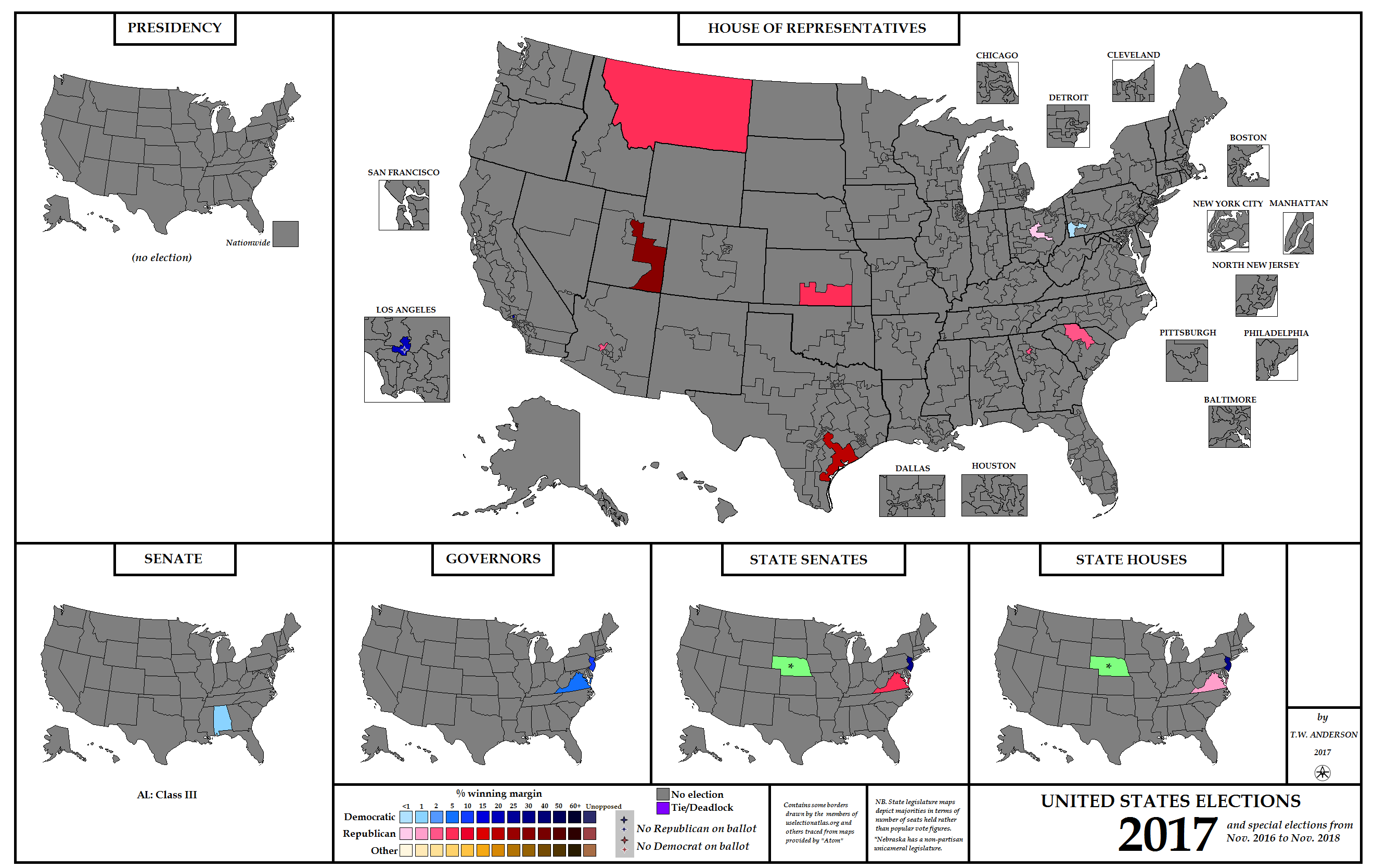 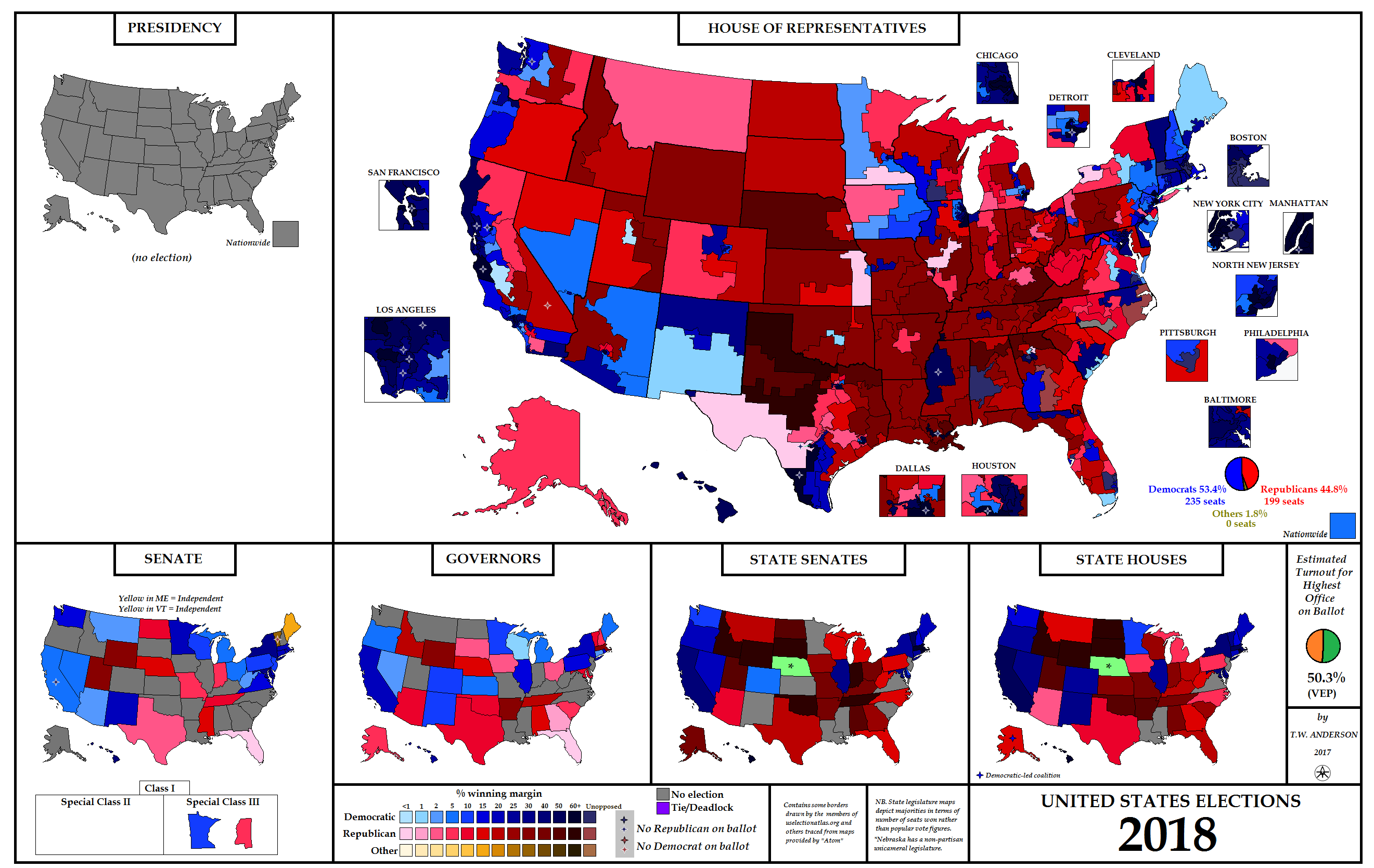 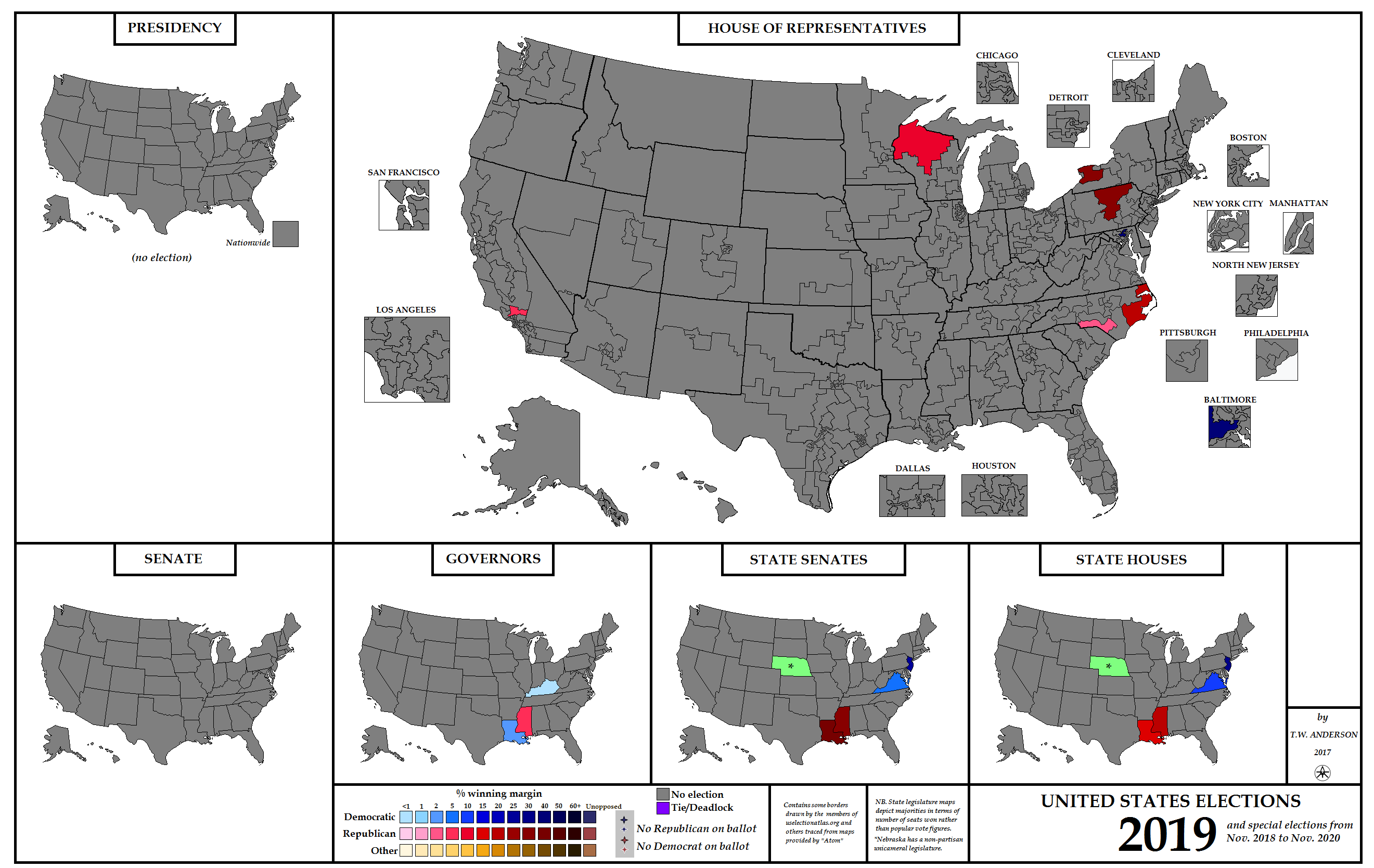