The chemicals tell me I must PERISH LIKE A DOG!

So I take it the CC dominance was broken in this election then?
N

Nanwe said:
The new electoral system is a non-compensatory mixed-member system except both systems are proportional.
Click to expand...
This genuinely feels like an AI-generated electoral system.
N

Alex Richards said:
This genuinely feels like an AI-generated electoral system.
Click to expand...
I would love to follow the reasoning for the system, honestly. Something like "we need more proportionality, but compensation sound complicated, so let's just top things up while not touching the rest much".
G

I had completely forgotten how fucked up the Curbelo affair was even for Spanish standards.

And of course, despite everything that happened he’s basically the de facto President of the archipelago as ASG holds the balance of power in the regional parliament.
N

Gorro Rubio said:
I had completely forgotten how fucked up the Curbelo affair was even for Spanish standards.

And of course, despite everything that happened he’s basically the de facto President of the archipelago as ASG holds the balance of power in the regional parliament.
Click to expand...
Yeah, our politicians may be corrupt, but at least they are discreet. The whole incident just screams petty tyrant, a perfect cacique sense of entitlement.

Unfortunately. He'd have had way less influence as just another PSOE regional MP, I wonder if other well-entrenched island leaders will get similar ideas, or if the brutal party discipline would prevent such discordant thoughts.
G

Nanwe, did you manage to finish your FPTP Spain map?
N

Gorro Rubio said:
Nanwe, did you manage to finish your FPTP Spain map?
Click to expand...
No, never. Too complicated, frankly. Realised there are many areas of Spain that very alien to me so it's hard to push through and the paucity of precinct maps. I suppose I could give a try again now that we have so many data scientists who publish detailed precinct maps of the elections at El Pais and El Diario.
T

Nanwe said:
No, never. Too complicated, frankly. Realised there are many areas of Spain that very alien to me so it's hard to push through and the paucity of precinct maps. I suppose I could give a try again now that we have so many data scientists who publish detailed precinct maps of the elections at El Pais and El Diario.
Click to expand...
It was interesting to see but I can understand that - doing a somewhat similar project at the moment, I've nearly finished the groundwork but I suspect I wouldn't have started if I'd known how complicated it would be!
W

I don't have much to contribute other than your dedication to mapping seemingly every election is genuinely uplifting. Thanks for all the maps!
N

Witch0Winter said:
I don't have much to contribute other than your dedication to mapping seemingly every election is genuinely uplifting. Thanks for all the maps!
Click to expand...
Thanks! But I hardly map every election, lately mostly Spanish ones that seem interesting. Or Belgian ones because I'm living there. If anything the team at AJR are the real everything mappers.
N

Taken from data obtained from the French Foreign Affairs' Digital Archives, the data from the 1921 Lebanese census.

Similar issues were raised with the 1932 census, although that one was - unfortunately for me - carried out by Lebanese authorities.

The majority of 'Others' were likely minority Christians (Syriac, Chaldean and Armenian Catholics and Orthodox) as well as Beirut's significant Jewish community although many Armenians were yet to be made citizens - hence a large jump that can't be explained by demographic growth alone in the 1932 census.

As you know, Lebanon has not held a census since 1932 for fears of destabilising the country whose entire political system is based off a rectified version of the 1932 census' religious composition. So the closest thing is religious self-identification in the voter rolls. And this is some of the latest data in that regard, for comparison.

I've spent over a week digging information in French and English to make this, so I thought I'd share it. Welcome to the world of alt-demography:

​
The Levantine Union is part of Leinad and @Turquoise Blue 's Hail Britannia world and it consists of OTL Israel, Lebanon, the Palestinian territories and the Sinai. The way Leinad conceptualised was a sort of larger, Middle Eastern Switzerland or just a hella messier Lebanon, so demographic data was key.

Obviously, both Palestine and Lebanon are some of the areas that over the course of the last 70 years have seen the largest, more arbitrary demographic shifts as a result of armed conflict, so I couldn't just replicate OTL numbers for Israel whereas Lebanon is literally the worst place on Earth for demographic data. On purpose too.

The method for obtaining the 1954 data was two-fold:

​
Very interestingly for me, my numbers look eerily similar to the État-Civil's 1953 population estimate (see below). But actually this might not be a good thing, as I'm 50% sure that the État-Civil counted emigrants since it worked off 1932 numbers, so it over-represented Christians. But I suppose that could still make sense politically ITTL so I decided not to touch it.

As these estimates only count citizens, Beirut looks underpopulated, as there would have likely been some 100,000 more people in the city, from Armenians who refused to become citizens under the Mandate to Kurds and Syrian refugees to Westerners living in the city.

​
* The chances of finding an upper class, university educated, urban Shia in 1954 were extremely low.
A

That's an incredible amount of work there.
N

Alex Richards said:
That's an incredible amount of work there.
Click to expand...
Yeah, not gonna lie, but it's been fascinating, it's been something of a puzzle actually, but I've learnt a bunch about demographics and Lebanon along the way. Some of the works out there, like de Vaumas' especially, are extremely insightful in terms of explaining group characteristics if heavy on the Orientalism. Although that's to be expected from 1950s works.

I've also been making a map of a surviving Transcaucasia so maybe this experience can help with projecting some demographics for the region as well. Luckily here, the 1897 Russian census data is pretty damn good.
N

Alex Richards said:
That's an incredible amount of work there.
Click to expand...
I was doing some more research into Beirut and I came across their confessional division for the Beirut City Council in 1953. Best part? It contains a 1956 table on the city's demographic composition. The authors as cited in the text do admit that city numbers likely undercount the number of Shia living in the city as well as the number of Maronites. The former because being illiterate and living in 'tanaks' (shanty towns) were hard to count by police authorities and the latter because many Maronites lived in Beirut for most of the year but went to the Mount Lebanon villages to spend the 3-4 months of summer to escape the city's heat.

Fairly proud of the end result despite the large errors with the Shia community. I suppose large-scale migration had not yet started by the mid-50s.

Latvia held its last general election, for the 13th legislature of the Saeima on October 2018. The 2018 election brought about considerable changes compared to the two previous electoral cycles. The SDP "Harmony" remained the single largest party losing only one seat compared to the 2014 election, as it would be expected from a party with such a fixed electoral base as the Latvian Russian-speaking minority. Harmony topped the polls in Riga, some surrounding cities as well as the more Russian-heavy south-eastern parts of the Latgale constituency.

The radical changes took place on the right-wing of the political spectrum, where the two parties that had dominated the right, the agrarian Union of Greens and Farmers (ZZS) and the liberal-conservative New Unity lost half and more than half of their elected members, respectively.

In their place, three new parties gained representation for the first time, the populist Who Owns the State?, led by Artuss Kaiminš, an MP first elected in 2015 for the Latvian Association of Regions. KPV LV is a neoliberal anti-establishment populist party that seeks to appeal to a young, male constituency. KPV LV swept the rural parts of the country that in previous elections had voter for ZZS. Another new party is the liberal-conservative New Conservative Party (JKP), founded by former National Alliance MP Jānis Bordāns. Lastly, the progressive liberal alliance of the Movement For! and Latvian Development contested the election together as Development/For!, topping the polls in a few affluent suburbs of Riga.

Representation in the Saeima is rounded with the inclusion of the National Alliance, a right-wing populist party first formed as a coalition of the right-wing LNNK and the far-right All for Latvia! in 2011.

Two parties that had been present in the previous legislature lost all their seats by failing to cross the threshold. One was the centrist Latvian Association of Regions, which only gained 4.1% of the national vote share; and the other was the national conservative For Latvia from the Heart, that lost all 7 MPs it had gained in 2014 as its vote share crashed to 0.8%.

Government formation was complicated by the need to bring many parties together in order to prevent Harmony from being a part of the cabinet, a long-standing principle in Latvian politics, where the Russian minority interests' party is locked out of forming part of the national government, unlike say, in neighbouring Estonia. This is caused for instance by the fact that Harmony was an official partner of United Russian from its founding until 2017. Its main predecessor party, the Harmony Centre, had likewise been excluded from participating in national politics, due to, again, its perceived cosiness with Putin and ambivalent position on the Soviet occupation of Latvia.

Likewise, the agrarian ZZS was excluded from cabinet formation discussions, much like in 2011 and 2014 due to the party's perception as the tool of oligarch Aivars Lembergs, who finances the party.

Because of this, government formation took months until Krišjānis Kariņš was nominated on January 2019 to form a government composed of members from Development/For!, National Alliance, New Unity, the New Conservative Party and KPV LV.

The electoral system for the Saeima elections is pretty straightforward. The 100 members of the legislature are elected from 5 multi-member constituencies, roughly corresponding to each of the country's five 'cultural regions'. These constituencies elect anywhere between 12 (Kurzeme) and 35 seats (Riga). Latvian citizens voting from abroad are counted as voting in the Riga constituency. In order for a party to make it into the Saeima, it has to cross the national 5% threshold, otherwise, it is excluded - as it happened to the Latvian Association of Regions, despite topping the polls in two municipalities. 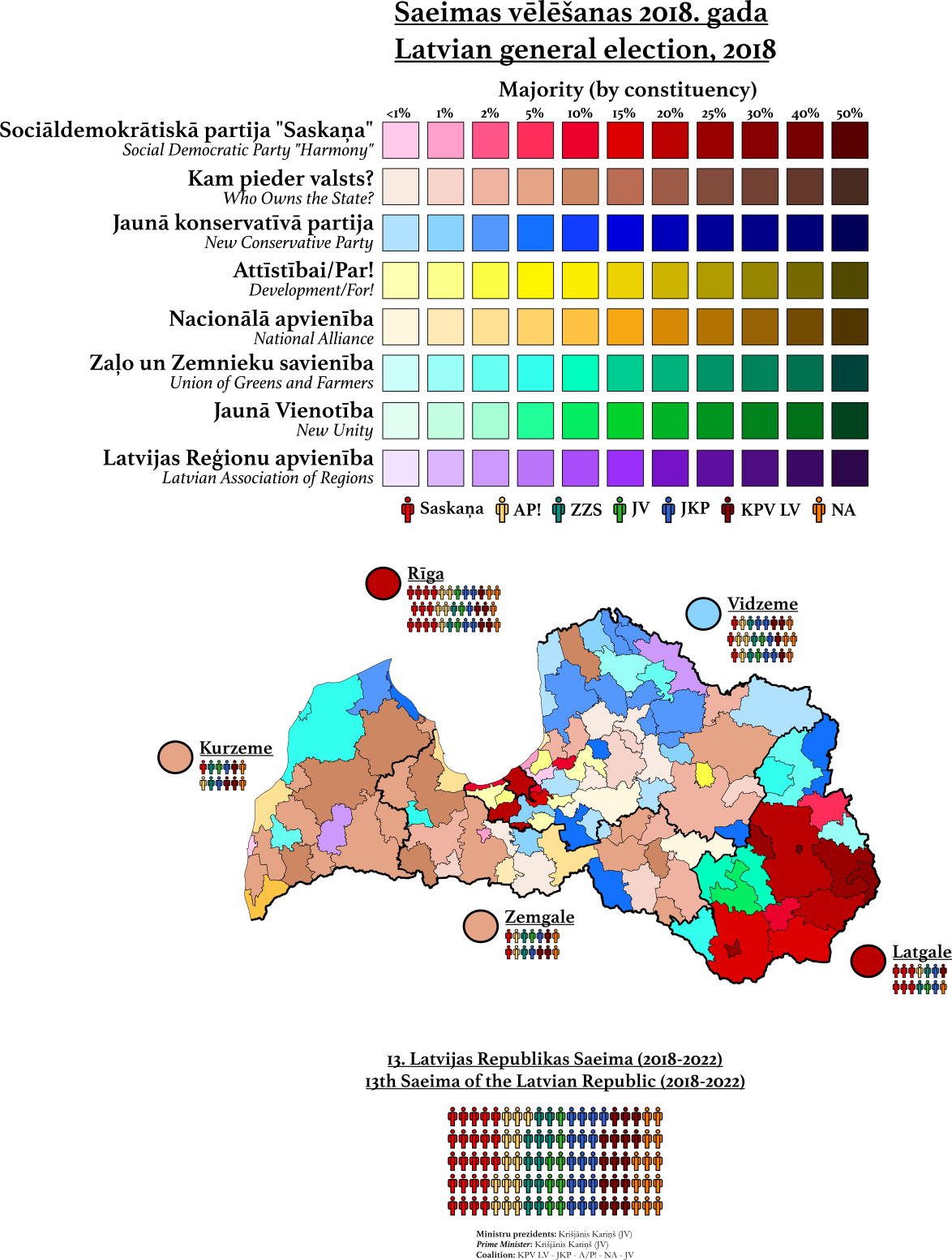 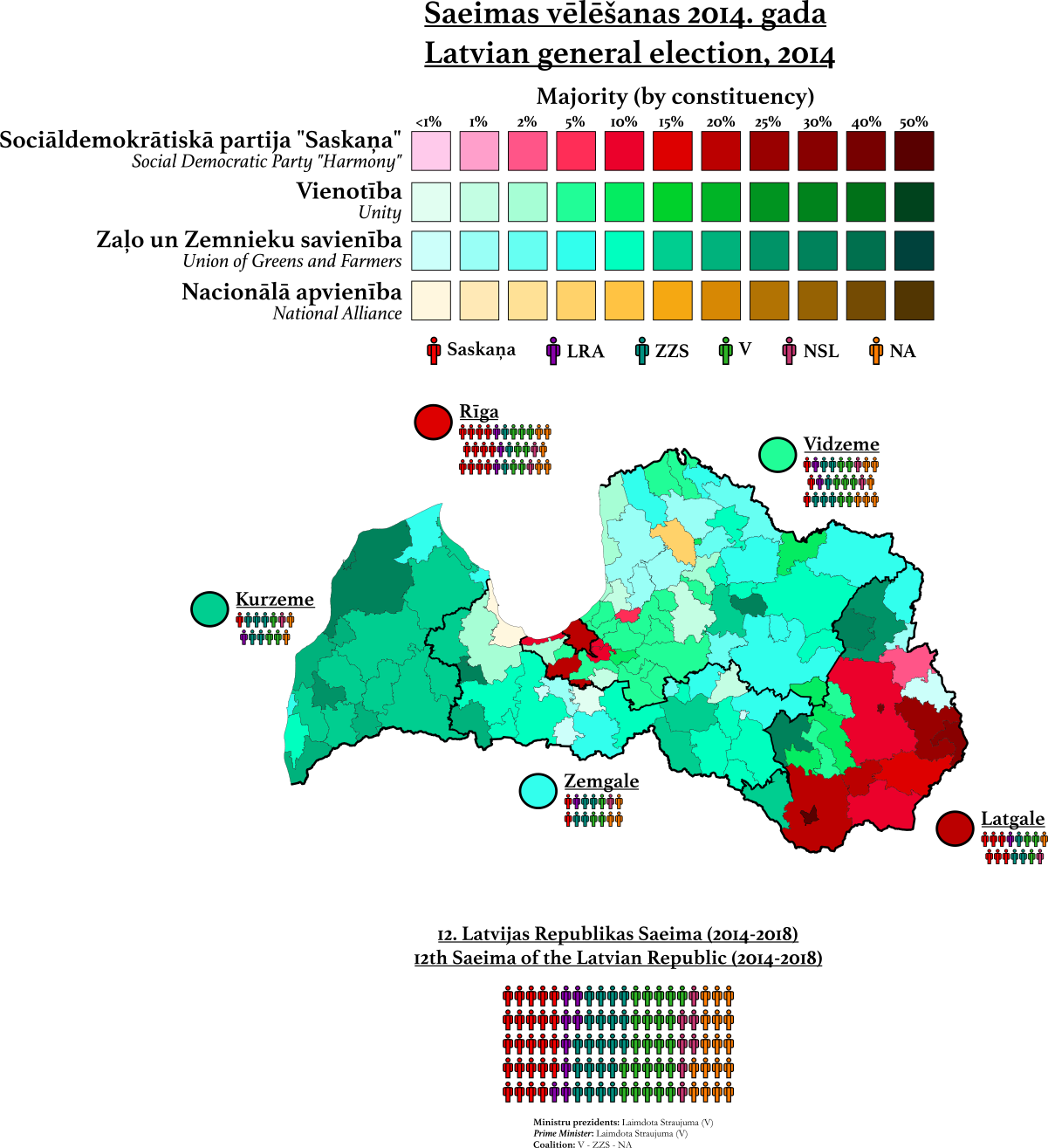 You weren't kidding about a breakdown in party system!
N

Alex Richards said:
You weren't kidding about a breakdown in party system!
Click to expand...
And yet, 2014 also marked a big contrast with the 2010 and 2011 elections! The Reform Party ran a joint list with Unity in 2014 and they basically lost half the seats they had separately in 2011 (from 42 to 23) LRA and NSL show up for the first time only to disappear by the next electoral cycle...

Latvia seems like a fun country to map, their centre right keeps on dissolving and merging and seeing entryism from different liberal-conservative and conservative-liberal parties that really aren’t that different. Unity is itself a party created out of a coalition of 3 different centre right parties that banded together in 2010. And they themselves can be traced to the early 2000s re-restructuring of the centre right landscape and so on.